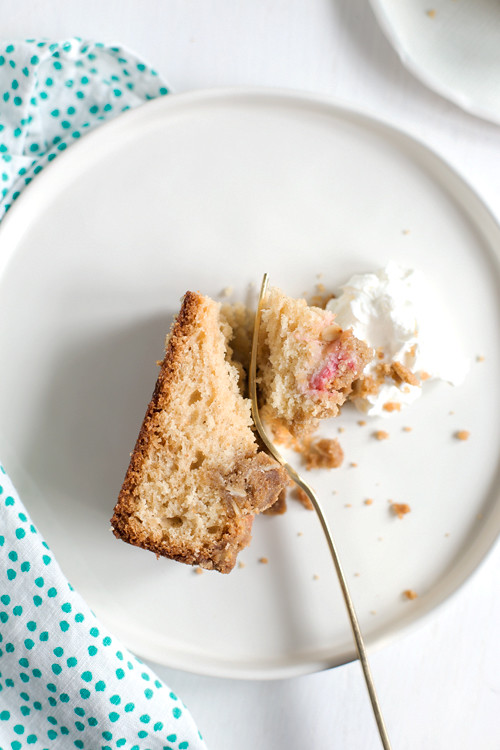 This past Sunday, I had my first Mother’s Day. It was a good one…I mean, this cute little guy was involved…though not exactly what I had imagined Mother’s Days to be. Instead of brunching leisurely, sipping mimosas, and kicking back, I woke up early and was at Home Depot just before 7am to rent a contraption called a “plate compactor.” Then, I moved a literal ton and a half of bricks and sand into my backyard from the driveway. FUN TIMES. I kept telling myself that in a few short weekends it would be all worth it because we will have a lovely, herringbone-patterned brick patio to lounge on for sunshine-y, summer days now and into the future. Luckily, I didn’t do all of this alone. Sean did a ton of the work and his brother also came over to help out. Plus, there was a big square of rhubarb coffee cake and a delicious breakfast sandwich in there, both from Grand Central, between the Home Depot trip and the manual labor stuff.

The cake was a total dream and I just couldn’t stop thinking about it, so I decided to recreate something similar at home. A lot of the recipes I found had a thinner batter that results in a cake with chunks of rhubarb mixed into the cake itself. I really wanted the rhubarb to sit atop the batter between the cake layer and the crumble layer. This cake, an adaptation of the New York-Style Crumb Cake from the famous Baked NYC, was pretty much perfect. A solid ratio of buttery boulders of crumb topping to tender-yet-sturdy cake base–perfect for holding up plenty of tart rhubarb. I didn’t do anything to the rhubarb because I knew that the sweet crumbs would offset the sourness of the rhubarb. I also held back on adding any sort of cinnamon or spice–which is normally my instinct with coffee-cake-like things, but I really wanted it to be all butter and vanilla with punches of rhubarb. The only thing I would do differently next time is to double the rhubarb. I totally think this cake could handle it. I could see this cake being made all times of the year with various seasonal or frozen fruits. I’d avoid anything too wet, like strawberries, but apples, cranberries, pretty much any berry, or even stone fruits (cherries!) would all be lovely. 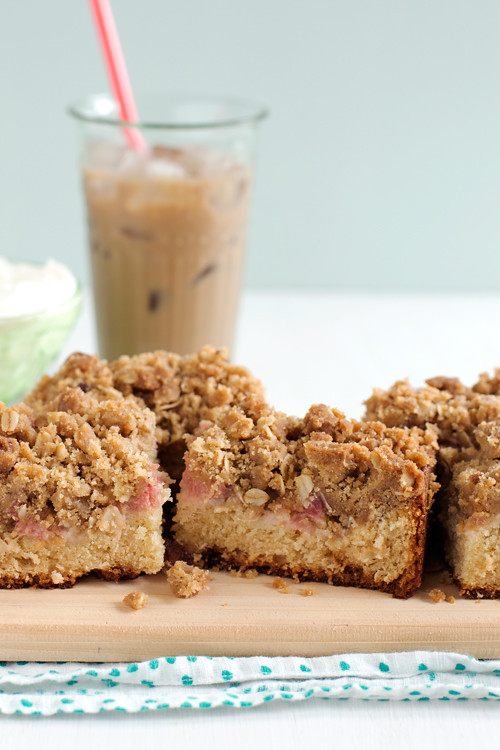 Aside from adding rhubarb, I  used a vanilla bean in the batter and added some extract to the crumb, omitted the cinnamon, subbed in more dark brown sugar, subbed in some oats for flour, and browned the butter for the crumb. To ensure large chunks of crumb, I put the mixture in the refrigerator to rest while I made the cake batter.

For the crumb topping:

Preheat the oven to 350ºF. Line a 9×13 inch baking pan with parchment, leaving an overhang on 2 sides, and grease well.

Make the crumb in a mixing bowl by stirring together the sugars, salt, and flour. Fold in the browned butter and press the crumb firmly into the bowl before placing in the refrigerator to rest while you prepare the batter.

In another bowl, combine the flour, baking soda, baking powder, and salt for the batter. Place the rhubarb pieces in another bowl and toss with about 1 tablespoon of the dry mix, just to coat lightly. Set aside.

In the bowl of a mixer, beat the butter until smooth. Add the sugars and the scrapings from the vanilla bean. Beat until the mixture begins to lighten in color and become a bit fluffy. Add the eggs one at a time, beating well and scraping the bowl after each addition. Add the sour cream and beat until just combined. Add the dry ingredients in 3 parts, scraping down the bowl after each addition and beating until just combined. Scrape the batter into the prepared cake pan and smooth the top. Scatter the rhubarb over the top of the batter. Grab handfuls of the crumb topping, squishing it in your fist to make large chunks of crumb, and cover the entire cake. Bake the cake for 45-60 minutes (mine took the full 60) or until a toothpick inserted in the center comes out clean. Remove from the oven and cool on a rack for at least 30 minutes before cutting and serving. Leftover cake can be wrapped well in plastic and stored at room temperature, though I opted to refrigerate the wrapped leftovers. Serve any leftover cake at room temperature.