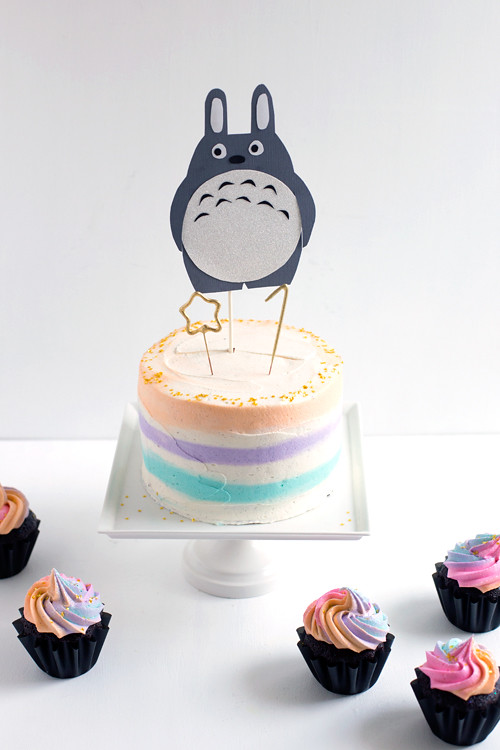 Literally a few days before Casper’s 1st Birthday, he took his first (unassisted) steps! I am both horrified and delighted by this new skill. I mean, he’s still crawling a lot–it’s more efficient–but, he’s definitely walking even if it’s more of a Tommy Pickles stumble. It’s pretty cute but, it takes all of me to not scoop him up immediately every time he stumbles.

We celebrated his first year with some family and friends with a BBQ over the weekend. Sean smoked ribs–they are seriously delicious and he deserves major props for perfecting his method– I made a nectarine and tomato salad that I’ll post here soon, and my deviled egg potato salad that I’ve been trying to perfect (and I think is just about there). I also made this cake, obvs. The cake itself is just my chocolate cupcake recipe, baked as 2 6-inch cake layers. I split each layer, so I had a total of 4 layers because I like a tall party cake. This recipe makes sturdy, stackable, easy to split layers. There’s just something about all those layers that shout “CELEBRATION!” to me. I wanted a classic cake combo and after vacillating for days I decided on a chocolate cake with basic, sugary, vanilla buttercream. I knew Casper would only have a little, so I just kind of threw caution (or mom-crazy) to the wind and went all out with his cake. Even though I wanted a basic buttercream, I had to bump up the flavor a teeny bit more and add malt powder. I love the flavor of malt in sweet, vanilla desserts and it paired so nicely with the deep, chocolatey cake. I also used my homemade vanilla extract–vanilla beans + vodka + time–I actually used the last of my batch that I’ve had for years. Literally, years. Like, 5. It was a kindergartener. So the flavor was very vanilla-y and had specks of vanilla bean, which I love seeing in frostings but any good quality (aka pure) vanilla extract would be perfect. I iced it in what I’m calling a “water color stripe”–basically I followed the method for making an ombré cake, but alternated white and colored frostings instead. It turned out pretty cute, I think, and it was easy to do. This style of frosting is totally fine if it’s imperfect, leaving plenty of room for error. I appreciate that in a frosting technique. I sprinkled the edges of the cake with little star sprinkles to make it extra festive. For the cupcakes, I piped all the remaning colors–plus some pink, since it didn’t end up on the cake itself–into another piping bag and piped it onto the cupcakes using a star tip. I sprinkled those with some star spinkles plus some disco dust (aka edible glitter) and they turned out crazy but fun. I call them “space unicorn” cupcakes. 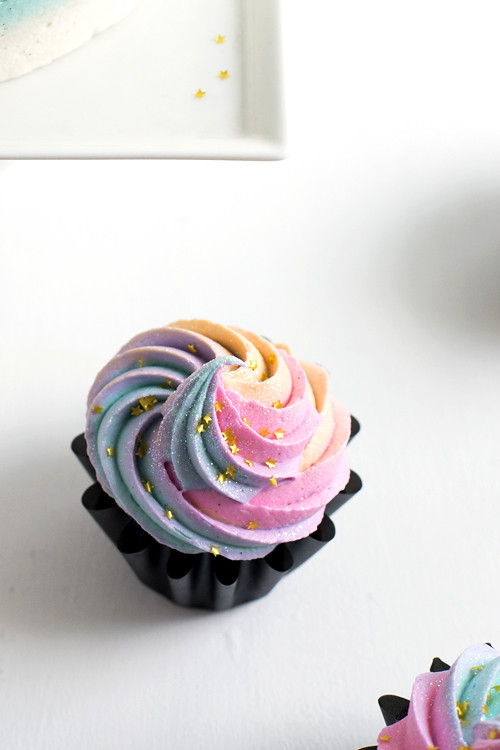 Anyway, then I made a little paper Totoro cake topper because Casper has a “Tototo” (as he says) plush toy that he LOVES (as well as a pillow and a print in his room). Sean is a huge Studio Ghibli fan, and it’s definitely getting passed on to Casper. He hugs and kisses Tototo and it’s so cute! It kills me. Initially I wanted to make a cake like this one from Lyndsay. I was feeling overwhelmed by the idea of trying to pipe a Totoro likeness, but I can put together a paper cut-out version, so I went with that. I also stuck some super cute sparkler candles in the top–thank goodness the didn’t catch Totoro on fire! It was a concern, but he remains unscathed and cake was had by all. 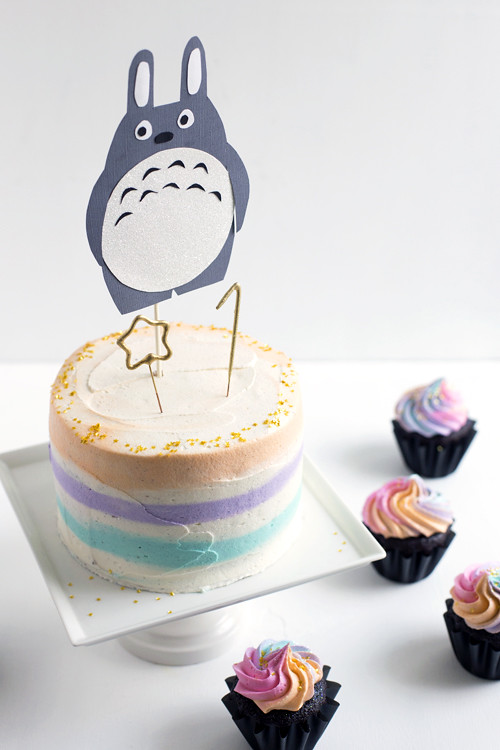 PS, You can see the lit sparklers and the rest of the food on my Instagram feed.

Save Print
Prep time
10 mins
Total time
10 mins
I did 2½ times (using 5 sticks of butter) this recipe to frost and fill a 4-layer, 6-inch cake and generously frost 9 cupcakes. For the cake, I usedthisrecipe and doubled it–which gave me the 2, 6-inch, cakes and 9 cupcakes.
Author: Cindy
Serves: about 3 cups
Ingredients
Instructions
Notes
Adapted from Glorious Treats
3.3.3077