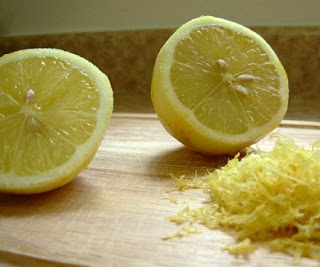 after making the buttermilk cookies with lemon zest the other day, i was left with a mostly full carton of buttermilk. i searched my recipe files and the world wide web for a recipe that would use up a good portion of the tangy stuff. i came across many recipes including biscuits, sorbet, fried chicken, pudding cake (yum) and this recipe for lemon-buttermilk pie. i was intrigued, but apprehensive. i have had some poor custard pie experiences—including, but not limited to an eggy, sweet-quiche disaster at a diner that was masquerading as rum custard pie, which had no discernable rum flavor. maybe i just don’t have a clue about rum custard, but i do know that my taste buds did protest to the rubbery mouth feel of the pie. needless to say, custard pies were lost to me for some time. with that said, I decided to put on my big-girl-apron and conquer this feat. but, it turned out to be more of a challenge than i had anticipated. so, i melted the butter and allowed it to cool. when i added it to the other ingredients the butter began to solidify into little butter-icebergs floating in a sea of custard and since i used a shallower bowl than i would recommend (my favorite mixing bowl was in the dishwasher), whisking vigorously was not as easy as I would have liked. however, i think that if i bring the other ingredients to room temperature beforehand (like i should have done anyway) the next endeavor should work out nicely. i also think next time the same situation could be remedied by whisking the butter with the sugar first and then adding the rest of the ingredients. 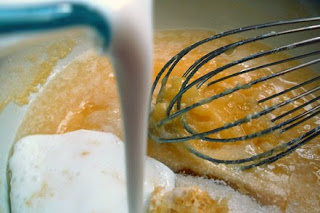 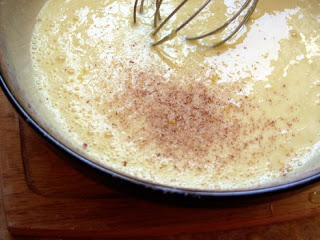 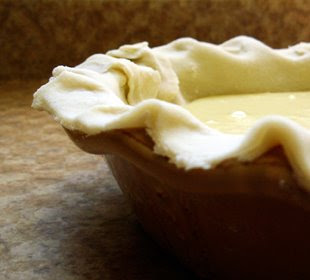 what i really should have done was dump the whole mess into the mixer and whisk like crazy…but i did not. your filling should be smooth…mine was not. instead i ignored my intuition and poured the semi-smooth filling into the crust. an hour or so later i pulled out a crater-pocked, wheezing and bubbling pie dish full of “molten lemon lava,” as sean described it. not the smooth, brown topped custard i had intended. it was literally pulsing and bubbling and hissing steam like the contents of magma-filled caldera. 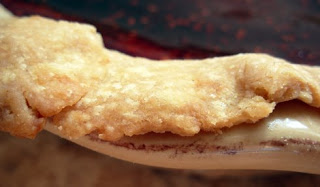 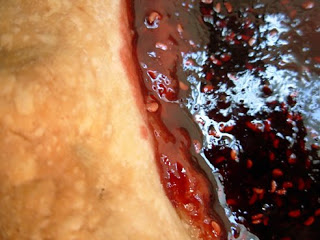 to save the appearance of the pie i melted some (a 1/3 cup-1/2 cup) raspberry jam in a saucepan w/ a healthy tablespoon of balsamic vinegar—i find that store-bought jams are too sweet and the vinegar cut the sweetness…besides, i’m a sucker for berries and balsamic. i prefer to use homemade jam, but i ate all of the raspberry lavender jam from last weekend and sean is nearing completion of the strawberry balsamic. 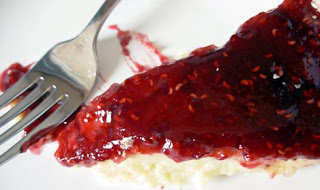 the filling was a bit off in texture, kind of dense and not as silky as i would like. but, with the addition of the raspberry-balsamic topping, the pie was sweet and tart. it had just the right amount of tang that makes the muscles in the back of your jaw tighten-up. my friend brooke likened it to lemon meringue pie filling, but thicker and heavier—again, not what i imagined, but tasty nonetheless. i do realize that not everyone likes their lemon flavored treats quite so lemony, so add lemon juice to your personal taste.

oh, and if you actually make sure your filling is smooth beforehand I expect your pie will be far more appetizing than mine. so it seems (for me at least), a custard rematch is in order.

heavily adapted from gourmet magazine, found on epicurious.com. i used the juice of one lemon for extra-lemony-goodness. this ended up being nearly four tablespoons because i more than like lemon. you can add juice to taste or leave it out. the recipe also calls for a different recipe for the crust, but i used an all-butter recipe that i almost always use when baking pies. below are the adapted recipes I used.
1 pie crust chilled, unbaked
1/2 stick (1/4 cup) unsalted butter, melted and cooled
1 cup sugar
1 1/2 cups buttermilk
4 large eggs yolks
4 tablespoons all-purpose flour
1 teaspoon vanilla
juice of one lemon
1 1/2 teaspoons freshly grated lemon zest
1/4 teaspoon salt
freshly grated nutmeg to taste

roll out dough and place in pie dish, crimp edges and chill in refrigerator while assembling filling.

preheat the oven to 350°F. melt butter and cool. in a bowl (of a mixer) whisk together the butter, the sugar. add the flour, the buttermilk, the egg yolks , the vanilla, the zest, the salt, and the nutmeg—whisk until well combined and smooth, and pour the filling into the shell. bake the pie in the lower third of the oven for 25 minutes, reduce the temperature to 325°F., and bake the pie for 20 to 25 minutes more, or until the filling is set and golden (this may take 10-15 minutes longer). let the pie cool on a rack and serve it at room temperature or chilled.

mix dry ingredients—cut in butter with pastry blender or food processor until a coarse meal forms. drizzle with ice water, 2 tablespoons at a time until dough forms.

turn out dough, divide and form into disks, wrap in plastic—refrigerate at least one hour.