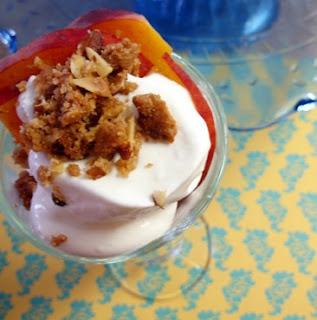 it has been a busy week at work and (for me) it’s not over for two more days. sigh. however, i did escape to the thursday night farmer’s market in sparks’ victorian square. sparks is to reno what st. paul is to minneapolis–kind of, but on a much smaller scale and weirder. the victorian square market is essentially a large street party with lots of beer and food and a little produce. basically its an excuse to start the weekend early behind the guise of “farmer’s market”.

i have not been to this market for a few years for a few reasons, 1. it is way too hot to shop for produce on the blacktop at 4pm, 2. i don’t fancy teens soliciting alcohol from myself or my friends, 3. there is not much produce.

having said that, i went anyway just to hang out with my friends (katie and josh are pictured) and have a few drinks. i did walk away with some tasty almonds, nice strawberries, pickling cucumbers (for kimchi, hopefully), and some really delish peaches. i didn’t make anything fancy with the peaches, just soft whipped cream and crunchy almond-graham topping. maybe next time i will make something more exciting…and go to the saturday morning market…and have drinks on my balcony instead. 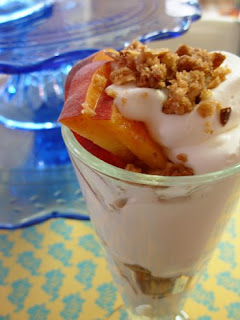 peahes, cream and crunchy almond-graham topping
this is not really much of a recipe, but it was pretty tasty. i think i will use this graham topping for other applications in the future.

places graham cracker crumbs, sugar, flour, almonds, and butter into a bowl. combine with fingers until a varied crumble is formed. spread evenly in a thin layer on a baking sheet. bake for 10 mins and cool.

break up cooled topping with fingers. layer peaches, cream and topping in serving dishes and enjoy!