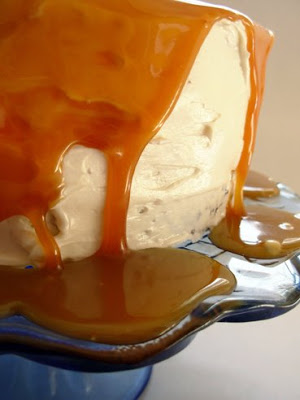 i only have one decent picture of this cake because we ate it all. it didn’t stand a chance. i intended to make this into a small cake and a few cupcakes for shf, but the cupcakes were very stubbornly stuck to the pan. i scrapped that idea after trying to salvage the cupcake remnants and just went with the 6 inch round layer cake. i found the recipe for the guinness chocolate cake over at smitten kitchen. the frosting was a irish cream swiss buttercream (also at sk) and the filling a whiskey caramel. the flavors were supposed to mimic a carbomb. the caramel ended up soaking into the layers…which ended up making the cake very moist and ultra decadent. it was the perfect end to a simple meal shared with friends.

heat sugar in a large, heavy bottomed saucepan until liquid–swirling or stirring–and dark amber in color. whisk in butter completely and remove from heat. add heavy cream and whisk, it will bubble (a lot), stir in whiskey and salt. allow to cool a few minutes before pouring into a heatproof container and cool completely.