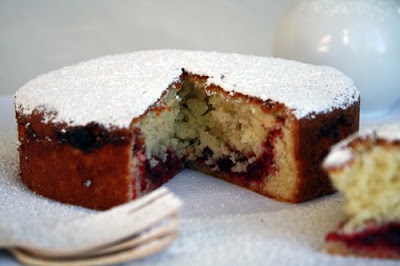 oh this cake. i made a version of this cake once before and it was a veritable disaster…well, at least i think a cake on the floor is, at the very least, unfortunate. having said that, it has not strayed far from my thoughts. then, i saw this cake and, similar in idea, i knew i would give this another go.

this time i nixed the crumbly topping (despite my love for crumbly goodness) in favor of a dusting of powdered sugar. i used buttermilk as the liquid and combined the cranberry idea from the first recipe with the jam from the second. i like the jam layer baked into the cake because it seems more homespun and unfussy that way. a friend said that it was reminiscent of thumbprint cookies, which i love because of that jewel of jam in the center.
i would like to imagine that i would serve this cake with tea or coffee and some good conversation. but, the reality of it is i enjoyed this curled up in a chair while watching either the office or the big bang theory (probably both…i cant’ remember). i think either way this is a charming little cake, perfect for sharing or curling up. 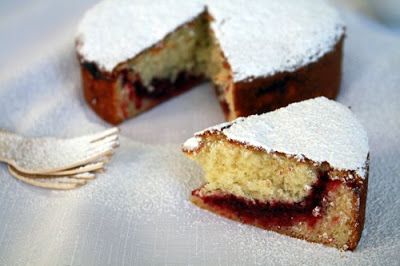 jam cake
adapted from two recipes, this one from smitten kitchen and one from cooking books.

preheat oven to 350. i used 2, 6-inch round pans. butter and line pan of choice with parchement.

scrape vanilla bean seeds into food processor with sugar and pulse until seeds are distributed throughout the sugar. place the vanilla sugar in a bowl and set aside.

pulse cranberries with 1/2 cup of the sugar until fine. fold in jam and set aside.

whisk together flour, baking powder, salt and salt. beat butter and remaining sugar in the bowl of a mixer until pale and fluffy. add eggs one at a time, beating well after each addition and scraping bowl down as needed. reduce speed and add flour in three additions and buttermilk alternately-beginning and ending with flour.

spread half of the batter among pan(s) and spread cranberry-raspberry jam mixture over, leaving a 1 inch border around the edges. spread the rest of the batter over the top(s). the batter is pretty thick, i found that spreading smaller spoonfuls worked the best.

bake for about 35 minutes (for smaller pans) or 45 for a 9-inch round pan. or until tester comes out clean when stuck into cake part-careful to avoid the jammy center. cool in pan 30 minutes before turning out.