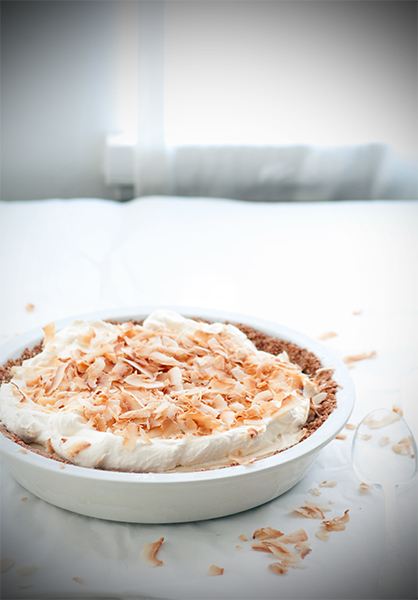 So, this pie. This pie will rock your socks off. I loved it. The lucky friends I shared it with loved it. Four of us ate the whole thing in under 2o minutes. We’re wild like that.

I made this amazing pie for the 4th of July. Sean and I made plans with our friends Jackie and Danny to have a Independence-Day-Grill-Fest! We figured BBQ chicken, corn, cornbread, and potato salad were all quintessentially Americana, and as per usual, I made dessert. Jackie told me it had to be something that screamed “USA!” So, I instantly began thinking about pies…peach pie, cherry, berry, and cream. Each pie was rejected because, well, it’s like hell in my kitchen in the summertime and pastry dough and the oven on for extended periods of time sounded nightmarish. Then, i started thinking about cold pies, with cookie crusts and custardy fillings. Which led me to think of my mom’s ice cream pie, which in turn led me to thoughts of an ice cream-cream pie hybrid!

Can i just say, cinnamon toast crumbs…where have you been all my life?! Best crumbs ever…EVER! 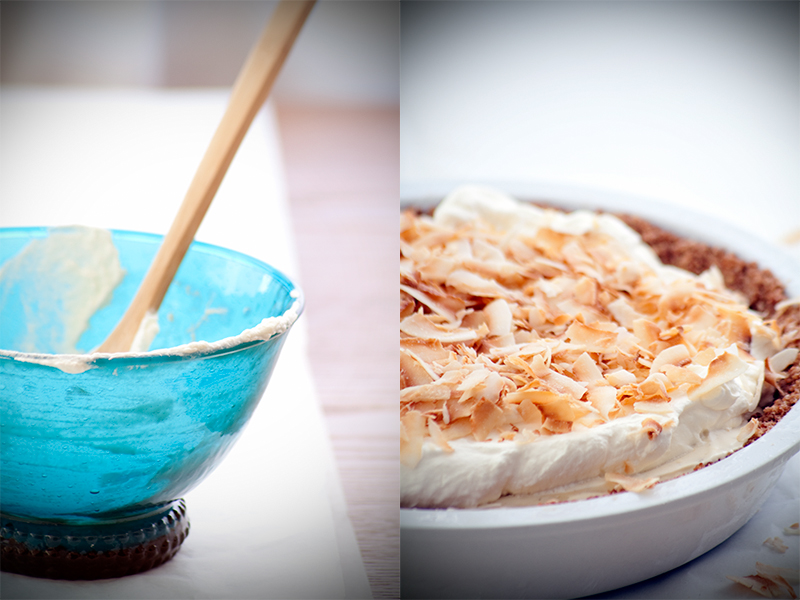 (thanks to Hannah from Honey & Jam for introducing me to this song!! Makes my heart swoon!)

Since the pie was such a delicious success and since it was fairly easy to assemble (you could totally cheat and use a store-bought crust and ice cream), I have many more ice cream pie concoctions and ideas rolling around in my head…like mini mud pies, strawberry ice cream pie, grasshopper ice cream pie…it’s endless 🙂

Adapted from Momofuku for 2

I used leftover challah buns from Trader Joes. I think you could use any bread that you want. I did have to use the oven for the crust, but not for too long and since this recipe is largely assembly, I was able to do all my baking after the sun went down.

Melt butter in a small saucepan or in the microwave. Toss bread cubes with 2 tablespoons of the butter, cinnamon, sugar, and salt. Spread onto a parchment lined baking sheet and bake for about 15-20 minutes, stirring halfway through, or until golden brown and toasty.

Remove toast cubes from the oven and allow to cool completely.

Once cooled, place cubes into a food processor and process until you have fine crumbs. Add remaining 2 tablespoons of butter and pulse until combined. Press crust into the bottom of a 9-inch pie plate or spring form pan.

Place back into a 350F oven and bake for 7-10 minutes. Cool completely before filling (if filling with ice cream, freeze the crust for about 15 minutes after cooling and before filling).

Adapted from The Perfect Scoop by David Lebovitz

1 vanilla bean, split in half lengthwise

Preheat oven to 350F. Spread coconut on a baking sheet and bake for 5-8 minutes, stir frequently to toast evenly, until golden-brown and fragrant.

In a medium saucepan warm milk, 1 cup of the cream, sugar, salt, and toasted coconut. Scrape the seeds of the vanilla bean into the saucepan and throw in the pod as well. Cover, remove from heat, and steep 30-60 minutes.

Re-warm coconut mixture on the stove. Set a fine mesh strainer over another medium saucepan and strain the coconut infused liquid into the saucepan. Press down on coconut firmly to extract all the goodness. Discard coconut solids.

Pour the remaining cup of cream into a large bowl and set the mesh strainer over the bowl. In a separate bowl whisk the egg yolks. Slowly pour the warm coconut mixture into the egg yolks, whisking constantly, then scrape the custard back into the saucepan.

Stir the mixture constantly over medium heat with a wooden spoon or heatproof spatula, scraping the bottom and sides as you stir until the mixture is thick and coats the back of the spoon. Pour the custard into the strainer and mix with the cream. Stir in the bourbon and stir over and ice bath until cool. Chill the custard in the refrigerator until completely chilled. Process in ice cream maker according to manufactures instructions.

Spread freshly churned ice cream (because it’s already like soft -serve at this point, smooth and spreadable!) into prepared pie shell, cover with plastic and freeze until solid. Before serving remove from the freezer for 10 minutes or so to defrost slightly for easy serving. This is a good time to whip up some heavy cream and toast up some large flakes of coconut for garnish.  Top with the whipped cream and a healthy sprinkling of coconut and serve! yumyum!