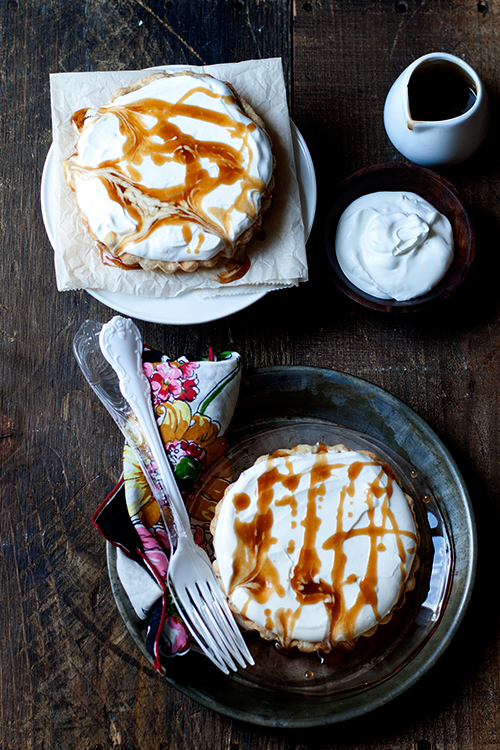 I don’t know about you, but Banana Cream Pie speaks diner fare to me. The kind of diner fare that you share with a milk-shake or that cocoa that comes out of a machine, best enjoyed after consuming a monster of a cheeseburger or something smothered in gravy…or chili and cheese.

Anyway, my house isn’t a diner (dang!), I didn’t enjoy these post burger eating, but I did share one with my husband every night for the last 4 nights.

And every night, it was pretty much diner heaven, sans greasy spoons and gut-busting gravy lakes. It was more of a couch-eating, Project Runway-followed-by-The-Daily-Show, hot-tea, then a nap (also known as bedtime), kind of deal. All of which is almost as good as diner heaven…if not even better.

Better how? Better, because there’s salted caramel all up on top of this and, get ready for this, browned butter in that vanilla pudding. 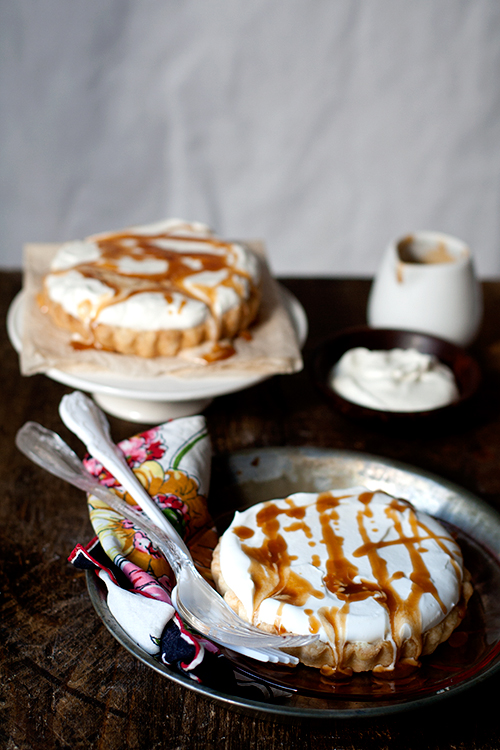 You could make this in a regular ol’ 9inch pie tin instead of little tart pans. If you go the tart pan route, this makes enough pudding for 4 little pies plus an extra cup for you to eat…which you will totally want to do.

1/2 recipe of Martha Stewart’s pate brisee (I always make this dough for my pies, you can use whatever recipe you like).

Roll out chilled pie dough to 1/4 inch thickness. Cut out rounds of dough about 1inch larger than tart pans (I used an inverted cereal bowl) and place dough rounds into pans. Place squares of parchment larger than tart pans onto top of dough and fill with pie weights (I use dried beans or rice). Blind bake shells in center of the oven for about 15 minutes until shells are completely baked and golden. Remove from oven and allow to cool completely on a cooling rack.

adapted from an earlier banana cream tart recipe, which was adapted from Baking from My Home to Yours. If you have an immersion blender, use it for this. I love my immersion blender…LOVE IT. Otherwise, you can pulse the finished pudding in a food processor or regular blender at the end.

In a small skillet heat butter over medium-low until milk solids turn golden brown and fragrant. Be sure to watch this so it doesn’t go from browned to burned. Scrape browned butter into a small ramekin and set aside.

In a medium, heavy bottomed saucepan heat milk with vanilla bean seeds and pod, until it just begins to bubble around the edges. Cover and turn of the heat. Allow vanilla to steep in the milk for 15 minutes.

Remove vanilla pod (I rinse mine well and add it to my jar of homemade vanilla extract {vanilla beans + vodka + time}) and bring the vanilla milk to a low boil.

In a small bowl whisk together cornstarch, half of the sugar, and the salt. Set aside.

In a large mixing bowl beat egg yolks with remaining sugar until thick and it gains some volume. Beat in the heavy cream. Beat in the cornstarch mixture until completely combined. Slowly begin to beat in the hot vanilla milk, to temper. Once all of the milk it incorporated scrape the custard back into the saucepan and heat over medium-low, whisking constantly until the custard thickens to coat the back of a spoon. Remove pan from heat (at this point you can press the mixture through a sieve if you’d like) and using your immersion blender, blend in the browned butter. Continue to blend for another 30-60 seconds, this makes the pudding have a lighter texture. Either use/eat immediately or chill, covered with plastic touching the surface.