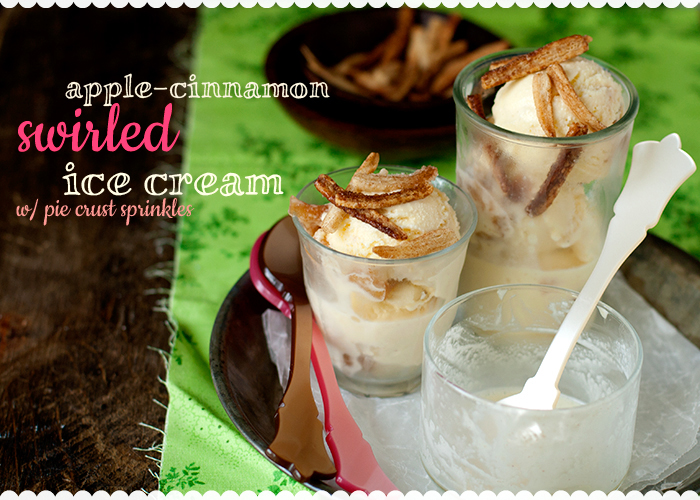 That is one mouthful of a recipe title, I know. 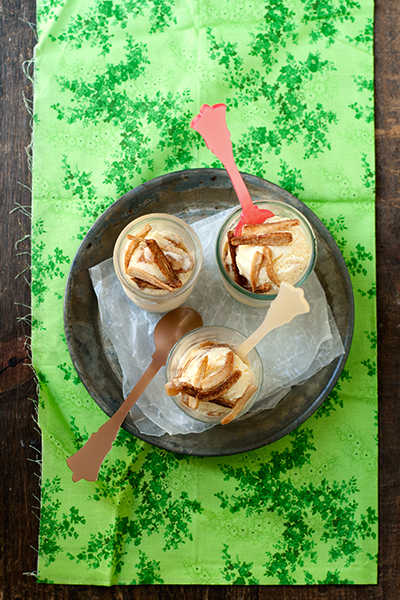 But, it’s ice cream that tastes like pie. It’s ice cream with an identity crisis…one that we should support. There are sweet, cinnamon spiced apples folded into a rich vanilla ice cream with little shreds of cinnamon-sugar dusted pie dough sprinkled over the top. It’s all the things you want with a slice of apple pie, but frozen. 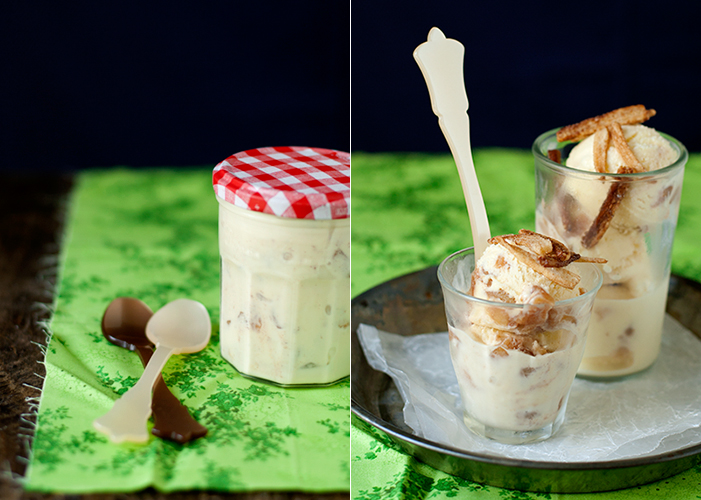 It’s best to make the apples the day before when you make the ice cream base, so both can chill over night.

3 apples, peeled, cored, and diced (I used Honey Crisp, Granny Smith would be nice too)

In a medium bowl toss apples with sugar, lemon, and cinnamon to coat. Set aside. Heat butter in a skillet until melted and foamy, add apple mixture and saute until tender and caramelized. Remove from heat and cool completely, store in an bowl covered with plastic in the refrigerator.

for the ice cream base:

Make an ice bath in a large bowl or clean sink.

Pour cream into a large bowl and set a fine mesh strainer over the top. Set aside.

In a medium sauce pan stir together milk, sugar, salt, and vanilla bean (if using–scrape the seeds from the bean and toss both the seeds and pod into the milk). Heat milk mixture to scald (just before a boil–small bubbles should appear along the edges of the saucepan). If using a vanilla bean, cover, turn off heat and steep for 30 minutes–then reheat to scald.

In a large, heat-safe bowl, whisk egg yolks well to break up. Remove the vanilla pod from the milk. Slowly pour the hot milk into the yolks, whisking constantly. Scrape the milk and yolk mixture back into the pan and  stir constantly over low heat, being sure to scrape the bottom of the pan, until custard becomes thick enough to coat the spoon.

Strain the custard into the heavy cream. Stir to combine. If using vanilla extract, stir in now. Stir the hot custard over the ice bath until it is cool. Cover the custard with plastic (touching the surface of the custard) and chill in the refrigerator overnight.

Freeze custard in an ice cream maker according to manufacturer’s instructions. The ice cream will be like soft serve at this point. Fold apples into ice cream before scraping into a container, covering, and freezing.

In a small bowl, combine sugar and cinnamon, stir. Set aside.

Roll out the dough on a floured work surface into a rough rectangle, about 1/8 inch thick. Using a pizza or pastry wheel (or sharp knife), trim the edges to make a rectangle–save the scraps to bake for snacking–and cut the rectangle into thirds. Brush each rectangle with butter and sprinkle with cinnamon-sugar. Cut each rectangle into thin strips cross-wise. Place on a baking sheet and chill in the refrigerator while the oven preheats to 375. Bake “sprinkles” for 6-8 minutes (watch this closely as the dough will go from golden to burnt in moments). Remove from oven and cool.