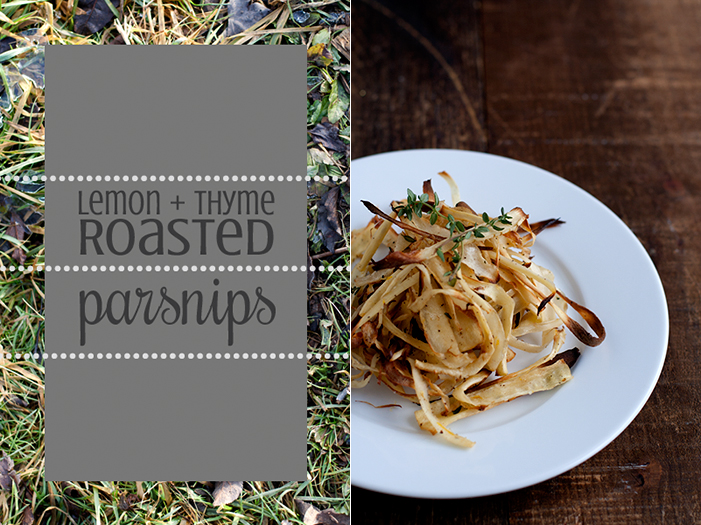 One of my goals for 2012 is to cook with vegetables I may have never tried or simply overlooked in the past. We eat something green and vegetal on a daily basis, but I want to expand beyond our usual broccoli/spinach love. I decided to start with this recipe for roasted parsnip strips from Donna Hay.

I’ve adapted the original recipe a little–using regular thyme and a bit of lemon zest in lieu of lemon-thyme. I also nixed the cheese (more of an absent-minded mistake, rather than a conscious decision) and tossed the strips in olive oil instead of butter. After roasting, the strips become crisp along the thinnest edges and sweetly caramelized. To me, parsnips flavor is reminiscent of a carrot with a bit of a peppery edge. I’m actually not the biggest fan of carrots, so I was a little wary of the humble parsnip, but this preparation has definitely converted me. I love a roasty-crisp root vegetable and these are definitely a new favorite. 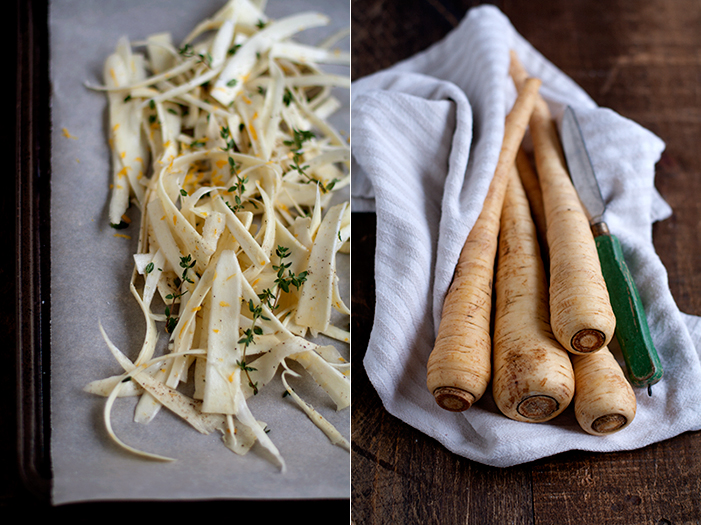 I used these as a garnish for some lentil soup, though they are just as delicious to snack on as-is. Since I made these well before dinnertime, I re-crisped them in a 350F oven for a few minutes–taking care to monitor them closely so they would not burn.

salt and pepper to taste

Preheat the oven to 375F and line a baking sheet with parchment.

Using a vegetable peeler, sharp knife, or mandoline, slice off thin strips of parsnip–leaving behind the woody center if using large parsnips. Toss parsnips in a large bowl with olive oil, thyme, lemon zest, and salt and pepper. Spread parsnips onto the baking sheet in an even layer so they crisp and do not steam. Bake for 12 minutes, toss using tongs, and roast for another 10-12 minutes until crisp and browned along the thinnest edges.