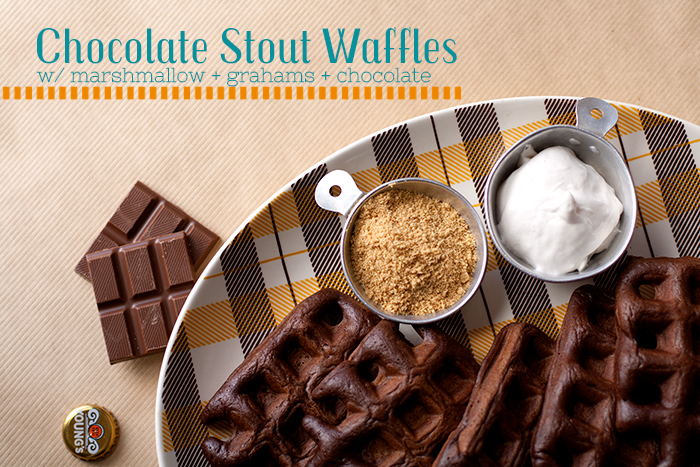 Sometimes I come across a recipe that I just have to share with my blogger pal, Megan of Take A Megabite. I just know she’ll be as weirdly excited as I get about food-stuffs. Sometimes this leads to us scheming up something delicious to make together. This happened before with fried pickles and Nutella-filled doughnuts.

Some things are just so good you have to share in the making with a friend. Last week I came across a recipe that used beer in pancake batter. As I know Megan is  big fan of beers AND breakfast, I shared the link with her via AIM (yeah sometimes–actually, all the time–we chat on AIM…throw-back!) and we quickly began a back and forth that led to the idea of Chocolate Stout Waffle S’mores. OMG. 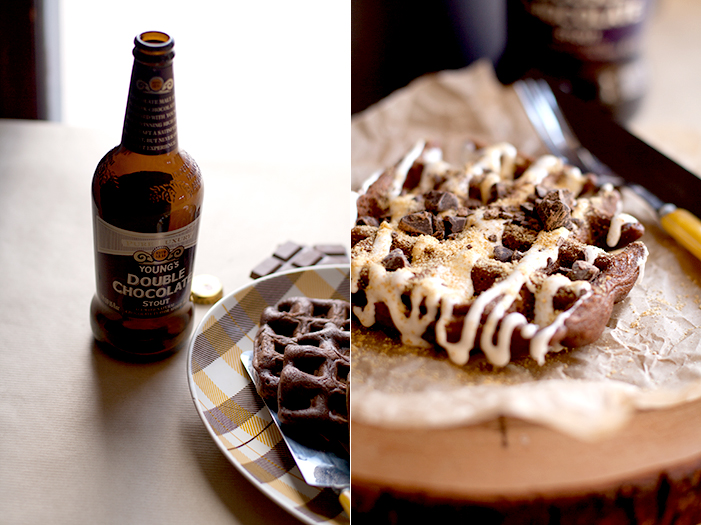 This past Saturday I made my way over to the Detroit area for a ladies lunch and beer waffling adventure. The beer combined with plenty of leavening agents makes these waffles light and full of airy bubbles. These waffles aren’t exactly breakfast fare with the addition of cocoa, chocolate stout (we used Young’s Double Chocolate Stout), a marshmallow drizzle, and graham cracker + chocolate chip sprinkles…but more of a lunch/dinner dessert type of thing. Though anyone having these for breakfast or brunch would be a champ in my book. 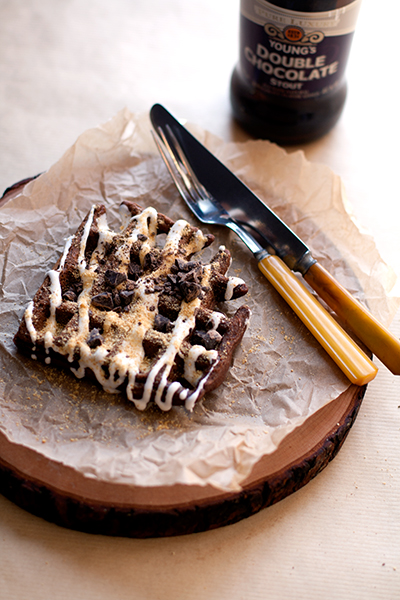 See Megan’s take on this waffle deliciousness HERE. Also! Megan was nominated for a Homie on Th Kitchn for Best Recipe Blog… if you’re feeling inclined, vote for her HERE!

In a small dish whisk eggs to break up and set aside. In a small saucepan heat butter with milk until butter is melted. Measure out a cup of stout. Make a well in the center of the dry ingredients and whisk in the egg, warm milk and butter, and finally the stout to combine. Set batter aside and heat the waffle iron (cook waffles in iron according to manufacturers instructions) while you make the marshmallow sauce.

From The Perfect Scoop by David Lebovitz

In a small dish sprinkle gelatin over 1/2 cup water, set aside to soften.

In a medium saucepan fitted with a candy thermometer heat remaining 1/4 cup water, sugar, and corn syrup. Put the egg white in the bowl of a mixer with the salt. Bring the syrup to a boil, once it reaches about 225F begin beating the egg white. Once the syrup reaches 240F and the egg white is stiff, carefully pour hot syrup into the mixer bowl in a steady stream with the beater on medium speed. Add the gelatin to the still hot saucepan, swirling to melt, and pour that into the mixing bowl as well–continuing to beat until the mixture is white, glossy, and room temperature. Beat in the vanilla. Use immediately.