Oh, hey! It’s another ice pop! These pops are the creamy, frozen yogurt variety, blended with tart sour cherries and bit of vanilla. The cherry-vanilla situation reminds me of the cherry push-pops of my youth…but more tart, more vanilla-y, and more better.

Since moving to Michigan I have become obsessed with sour cherries. They are mouth-puckering on their own, but a little sugar makes them sweet-tart and I find that they have an almost cinnamon-spice background flavor that just makes me crazy for them–dried, frozen, or jarred. The thing with sour cherries is that they can be tough to find. They’re the red gems you find in a classic cherry pie–sans pie goop. Even here in Michigan–a major sour cherry producer–I have never seen a fresh one. I get by just fine with whole, frozen sour cherries. The complex flavor of the cherries is perfectly matched with smooth vanilla, making this frozen treat a sure winner. 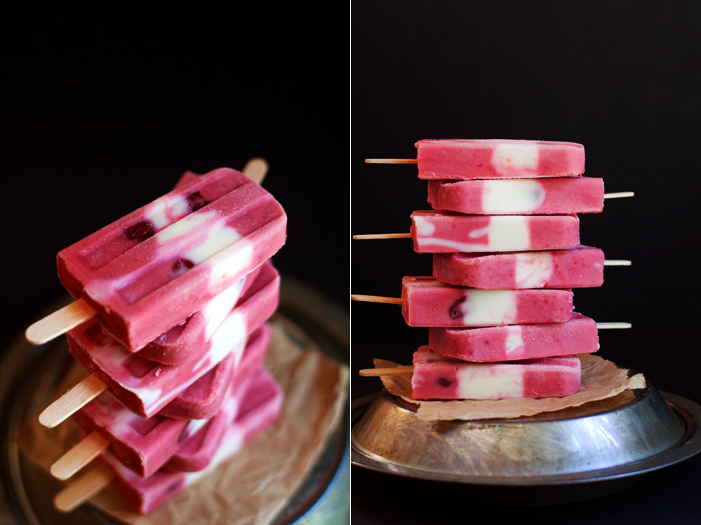 I used non-fat greek yogurt here because it’s basically the only yogurt I buy. I also used homemade vanilla sugar–I keep a jar around or simply rub the guts of a vanilla bean into the sugar–if you don’t have a vanilla bean, stir 1-2 teaspoons of vanilla extract into the yogurt mixture. If you can only find dark, sweet cherries feel free to use those and add a tablespoon or so of lemon juice to the puree to brighten the sweetness…though, I urge you to find the sour ones if you can. They really are something special.

In a mixing bowl, combine yogurt with 1/2 cup of the vanilla sugar, stir to dissolve the sugar. Divide the mixture in hal between two bowls, set aside.

Puree the cherries with 1/4 cup of the sugar and any collected juices from defrosting. Press the cherry puree through a fine mesh sieve, pressing to extract as much as possible, discard solids left behind. Stir the cherry puree into one of the bowl of yogurt–leaving the other plain.