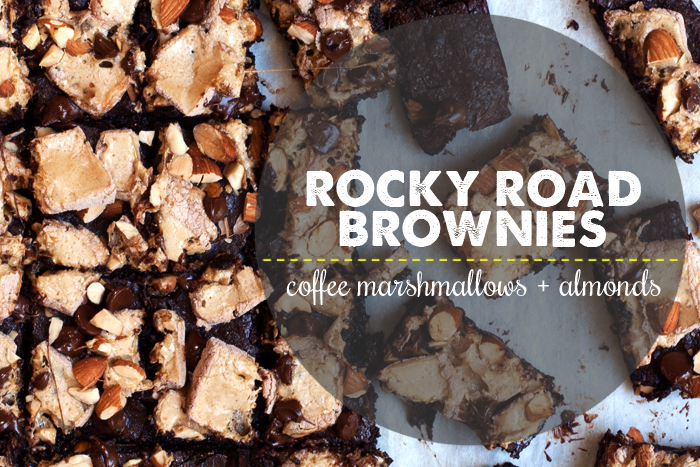 I would apologize for the brief hiatus in the last few weeks, but, truth be told…I’m not super sorry about it since I was living life, soaking in some solid family and friend time, and clocking as much niece time as I could. Twelve days ago my newest niece was born and I just can’t resist snuggling new born babes–they’re a wonder, it’s for real. It was an exciting trip home, but I’m glad to be back with my husband, pups, and cooking in my own kitchen. 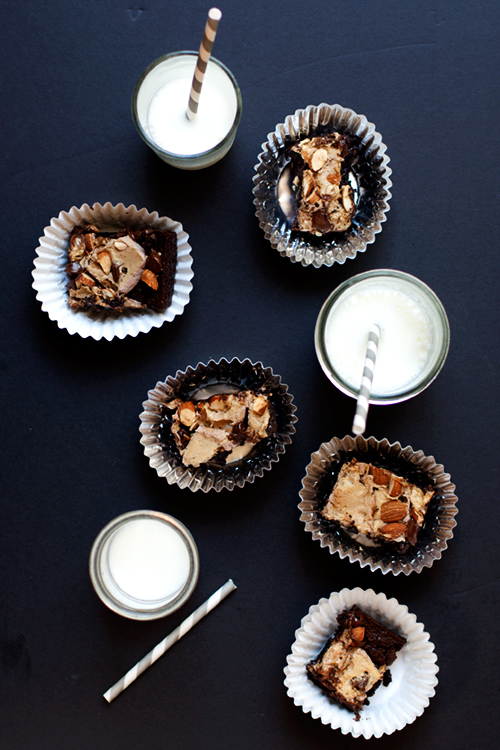 Anyway, about the brownies! There’s nothing about Rocky Road that I don’t like–chocolate, marshmallows, and nuts–so much texture. These are a rich, fudgy, sticky, gooey, and crunchy. Instead of the standard marshmallow, I switched it up and made these coffee flavored. I tried to bake the marshmallows into the brownies, but that resulted in a soggy, melted, marshmallow mistake.  Since the mallows were homemade I added them at the end of baking, which lets them melt a bit into the brownie, forming an irresistible topping. 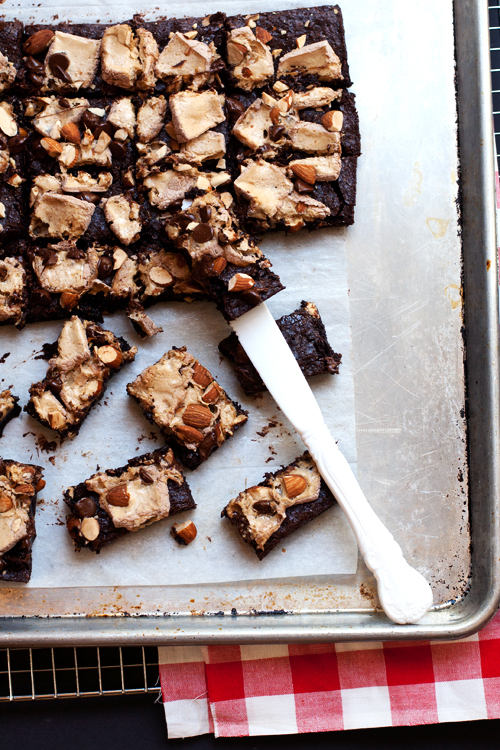 I adapted my fave brownie recipe for this, you could probably use whatever one you like best with fine results.

In a small bowl, soften gelatin in 2/3 cup water for about 5 minutes.

Prepare an 8x8inch pan by lining with parchment and spraying lightly with cooking spray. Set aside.

In a medium saucepan combine 1/2 cup espresso with the sugar, heat over medium high to dissolve and bring syrup to a low boil. Cook 1 minute, remove from heat, and stir in gelatin until it is completely dissolved and combined.

Using a hand or stand mixer, beat the syrup until it become light in color, voluminous, and holds a medium-stiff peak. Scrape the mixture into the prepared pan and dust the top with powdered sugar. Allow to set up several hours before cutting and rolling each piece in powdered sugar. Can be kept in an air tight container for up to 2 weeks.

10 marshmallows, cut in half

Preheat oven to 350*F. Prepare an 8×8 pan by greasing and lining with parchment. Set aside.

Fashion a double boiler out of a saucepan and a large, heatproof mixing bowl. Add butter, chocolate, sugar, cocoa, and salt–stir to combine until butter is melted and the mixture feels hot to the touch. Set aside and allow to cool to just warm.

Using a wooden spoon, stir in vanilla, then, add eggs one at a time, stirring vigorously after each addition. Add flour and combine. Once flour is incorporated, continue to stir vigorously for about 40 strokes. Pour into a prepared 8×8 baking pan and bake for 20-25 minutes, or until a toothpick inserted into the center of the brownie comes out with a few moist crumbs.

Remove the brownie from the oven, top with almonds, marshmallows, and chocolate chips. Return to the oven, turn off heat, and allow the topping to melt onto the brownie top for 3-5 minutes in the still warm oven. Remove and cool completely on a wire rack before cutting.