Maybe it’s already obvious, I don’t know,  but I’m not much of a sports fan. If it’s a “game day” of any sort, you just better know, I’m totes in it for the snacks. Wings, beers, brauts, and dips galore.

As an avid fan of dipping crunchy chips/crackers into gooey things, I find the ever-present queso dip to be dangerously alluring. From the jar, I basically feel like I am shoveling straight garbage into my face…delicious garbage, but trash nonetheless. Even most homemade versions turn to a block of processed, melty, orange “cheese”. I mean, yeah, it melts like a dream, but I really wanted to make a cheese dip sans Velveeta. Just once, at least. 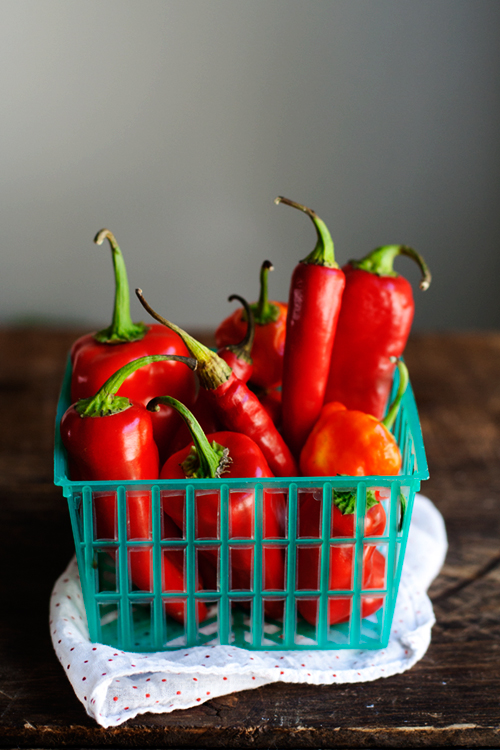 Don’t get me wrong, this dip does not lack in cheese or calories. It’s made creamy by way of evaporated milk and a little cream cheese. Real cheesy flavor comes by way of sharp and medium cheddar–though you could really use what you want, anything that will melt with a little gentle heat. The spice is dialed up with a little habañero, some anaheims, and red jalapeños–roasting the mix of peppers adds heat and sweetness. While the end product looks almost identical–it doesn’t quite have the same sheen that the jarred stuff has–the flavor sets it apart and makes the little effort it takes to throw this dip together worth the work.

All of the peppers I purchased were red. I spotted them at the farmer’s market and they were too pretty to resist! Red peppers are not necessary, just use whatever ones you like, I’m sure the next time I make this, green jalapeños will make an appearance.  Dial back the heat by removing all the ribs and seeds post roasting, or nix the habañero if you want.

8 ounces cheddar cheese (I used half sharp, half medium)

Preheat oven to 375*F. Rinse and dry the peppers. Snip the root ends of the garlic cloves, leaving skins intact. Toss the peppers and garlic with a few teaspoons oil and roast in the oven until the pepper skins blister and garlic is tender, about 15 minutes. Remove from oven, place peppers in a bowl and cover. Allow to sit for 5-10 minutes. Remove the pepper skins, seeds, and ribs (I left a few in for heat). Chop peppers. Squeeze garlic cloves from their skins.

In a medium saucepan, sweat shallot in a teaspoon of olive oil, until tender and translucent.  Add the garlic and peppers. Add the evaporated milk and bring to a simmer, stir in the cheeses, in 3 batches, until everything is combined, smooth, and heated through. Serve warm with chips, crackers, or anything else that needs a cheese blanket.

Can be stored in an airtight container in the refrigerator for 1 week. Reheat in the microwave in 30 second bursts, stirring, between each, or on the stovetop over gentle heat, stirring often.