Green bean casserole never graced the Thanksgiving table of my youth. It was one of those things I only ever had at other peoples houses and gatherings. At it’s simplest and most processed, it’s a mix of canned soup, green beans, and canned fried onions…and, I loved it.

Fast forward to adulthood, and I can’t really get with canned, cream-of-whatever soups anymore. They just don’t do it for me–too bland, yet somehow too salty, as well. I can, however, get with those crazy fried onion dudes…so, I made the soup and stuck with the store-bought, french-fried alliums*, and ditched the canned beans for fresh ones. 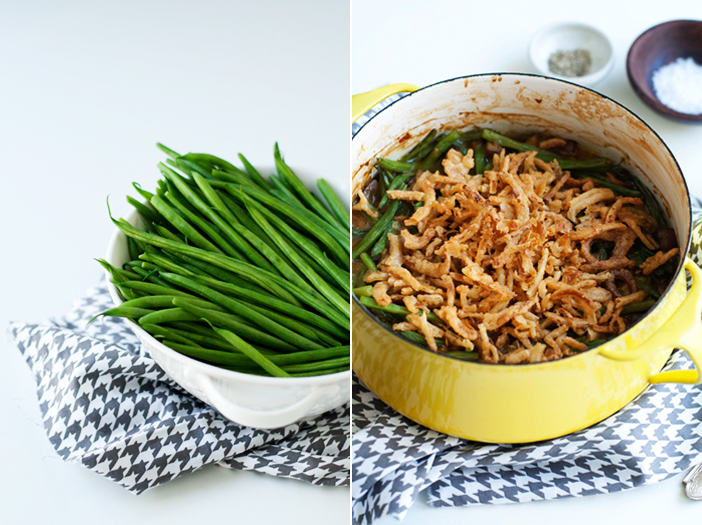 The soup starts with mushrooms, plus some shallot and garlic for flavor, and is finished with an odd-yet-totally appropriate mix of chicken stock, fish sauce, and a little half & half. I first sweat, then caramelize the mushrooms–which seems counterintuitive, but it makes for little nubs of mushroom that are super nutty and flavorful. The fish sauce adds savory depth and zero fishy-weirdness.

This casserole is a nod toward the original, but with better flavor, layered richness, and a fresher, more vegetal profile from the fresh beans and homemade mushroom soup. The crunchy topping is everything you remember (and love) of the classic version, with a little bit of an update underneath.

*You can go with the OG French’s brand of onions, but there are a number of store-brand options out there. I have, personally, had good luck with the Trader Joe’s version.

Since the soup part of the original casserole is the sodium-flavored-condensed-variety, I wanted the soup base for this to be super flavorful. My secret addition is a bit of fish sauce for another layer of savoriness–you can leave it out (along with subbing veg stock for chicken) if you want to go vegetarian or don’t have fish sauce on hand. I like to keep a bottle on hand in the refrigerator for asian dishes–a little goes a long way and it keeps well. I also added turmeric–I add it to a lot of things since it’s good for the brain, it just adds a warm color to the sauce and the faintest earthiness, but it’s totally optional here.

1 Tablespoon half and half

In a medium to large saucepan, heat oil over medium-high heat. Add chopped mushrooms to the pan and season lightly with salt–the mushrooms should release a good amount of liquid after salting–continue to cook until the mushroom liquid has evaporated and the mushrooms bits begin to take on some caramelized color and turn fragrant, stirring occasionally. Add the shallot and stir, cook until shallot is translucent and beginning to soften. Add the garlic, stir, and cook about 1 minute. Add the butter to the pan to melt, stir in the flour, along with turmeric and cayenne (if using), to make a roux. Cook for 1-2 minutes to cook out the raw-flour flavor. Stir together the chicken stock, fish sauce (if using), and half & half. Begin adding the chicken stock mixture to the mushroom-roux mixture, stirring out any lumps, until all of the liquid is incorporated. Taste and season accordingly with salt and pepper. Continue cooking the soup base until it begins to bubble and has thickened a bit. Remove from heat and set aside.

In a large pot of salted, boiling water, cook green beans for about 2-3 minutes, until just tender. Drain the beans and set aside.

In a large mixing bowl, combine green beans with the soup base, mix to coat well. Add about 1/4 cup crushed, french fried onions, and mix to combine. Pour the green bean mixture into a baking dish and bake for 30 minutes, until the casserole is bubbling. Remove from oven, top with remaining french fried onions, and continue to bake another 5 minutes until the topping is crisp and golden brown. Remove from oven and allow to cool 5-10 minutes before serving.