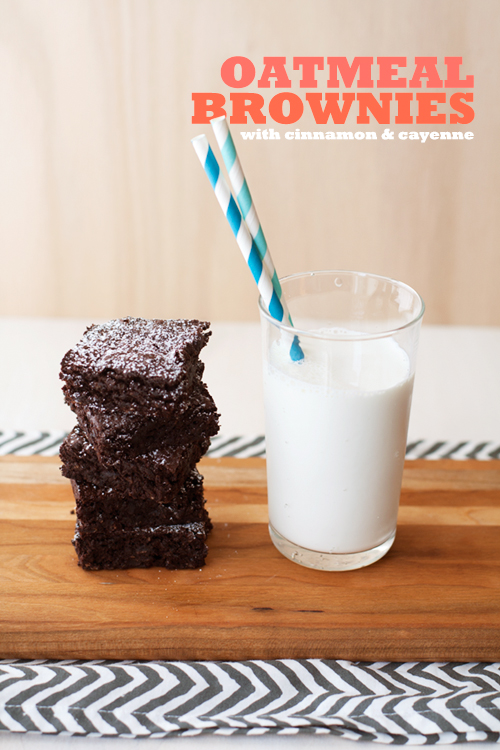 If you were married to me, like Sean, then you would know that one of the hazards of being my bed-mate is that I basically sleep like a hibernating bear-wolf and don’t take well to being disturbed. He tells me that sometimes it’s like trying to hug an angry baby, who swears at you. All punching arms and vitriol.

It’s not the cutest, but I seriously am not even aware of it…because I’M ASLEEP. Jeez, let a girl slumber, ya know? 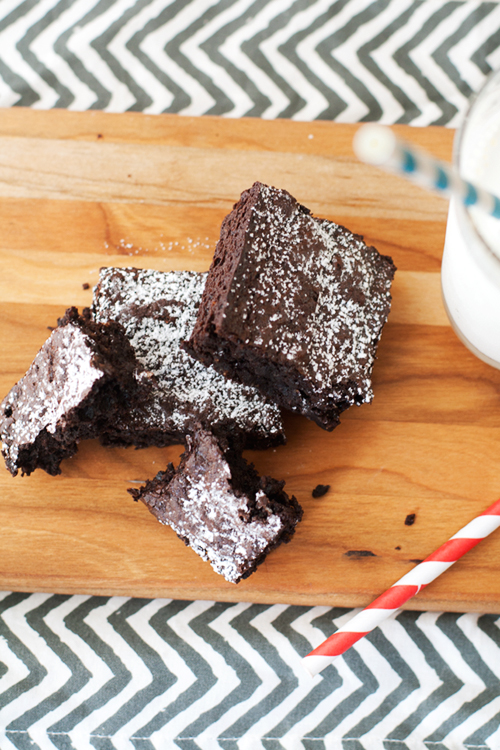 Anyway, even though my R.E.M cycle is, obviously, super important to my unconsicous mind, I still feel a touch guilty at times, especially if I learn that one of my sleeping-wild-animal-angry-baby-punches actually makes contact. I don’t want to be a sleep-fighter, ya know? Not that Sean ever holds it against me — he thinks it hilarious, actually — but I still find it necessary to treat him and brownies are always a win with that guy.

These brownies are made with oat flour, buzzed up to a coarse meal in the food processor. They have the littlest bit of chew from the tiny nibs of oat throughout, with an intense chocolate flavor. I’m kind of in love with these brownies, they aren’t messing around when it comes to deep, dark, chocolatey goodness. I added some cinnamon and cayenne for some warmth and because I love spice and chocolate together. The brownies are a little bit crumbly, I suspect from lack of gluten, but I really think it lets their fudge-y nature shine. Not only are these brownies a chocolate dream, they can be certifiably gluten-free with a little attention to the ingredients. Just make sure your oats, chocolate, and cocoa powder were not processed in a plant with wheat/gluten products (i.e. read that label!). 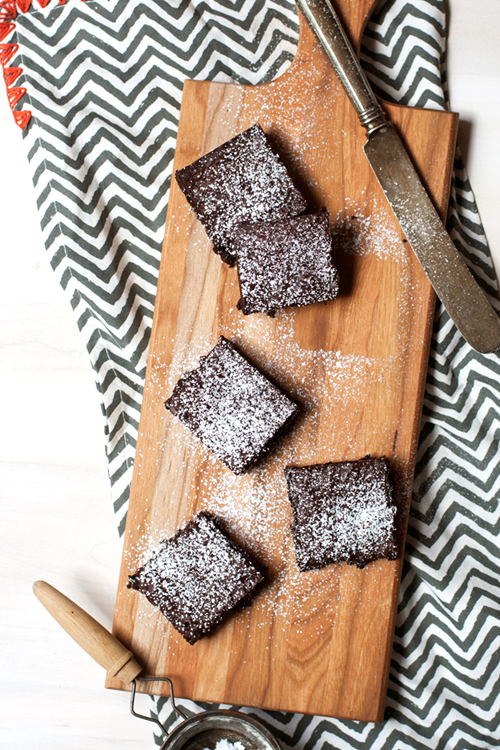 I made my own oat flour by simply processing it in a food processor. My flour was fairly coarse, which was fine with Sean and I, as we liked the chewy bits throughout the brownies. Process yours finely, or purchase it already milled from the store, if you prefer. I used 1/2 maple syrup and 1/2 sugar to sweeten this recipe, you can use all sugar if you want (brown or white). If you make sure to use oats that are guaranteed gluten-free (as well as cocoa and chocolate) these brownies are gluten-free friendly. Hurray!

Preheat your oven to 325˚F. Line an 8×8 inch baking sheet with parchment, leaving an inch or 2 overhang on 2 sides, and grease both the pan and parchment well. Set aside.

In a pan on low heat melt the butter and chocolate, stirring so as not to burn, until smooth and melted. Scrape into a bowl and whisk in the sugar, maple syrup, cocoa, cinnamon, cayenne, salt, and vanilla, until combined completely. Beat in the eggs, 1 at a time, until combined well. Fold in the oat flour and let the batter rest a few minutes so the oats absorb some of the liquid and begin to soften. Spread the batter into the prepared pan and bake in the center of the oven for about 25 minutes or until a toothpick inserted in the center of the brownie comes out with a few sticky crumbs. Remove from the oven and cool on a rack before cutting. Can be stored in an airtight container at room temperature for a few days. [/recipe]