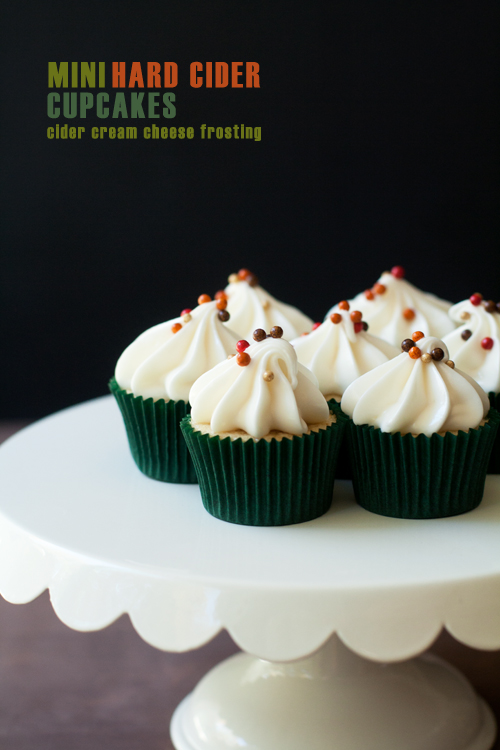 Guys, I’ve been wanting to make these cupcakes for a while now…ever since I sent Sean to the liquor store to buy some hard cider for a braised pork thing I was doing. But, he couldn’t find my favorite (Crispin) cider, so he bought a 6-pack of a different kind and it ended up being spiced…which, of course, wasn’t what I had in mind, but total A for effort!

So, in order to waste-not, I came up with this hard cider cupcake idea and oh, man…it ended up being a happy accident. I was so surprised by how much the hard cider flavor really comes through in these minis and in the frosting. There aren’t any actual apples in this recipe, but the apple flavor from the cider really shines, plus it lends a pleasant booziness. 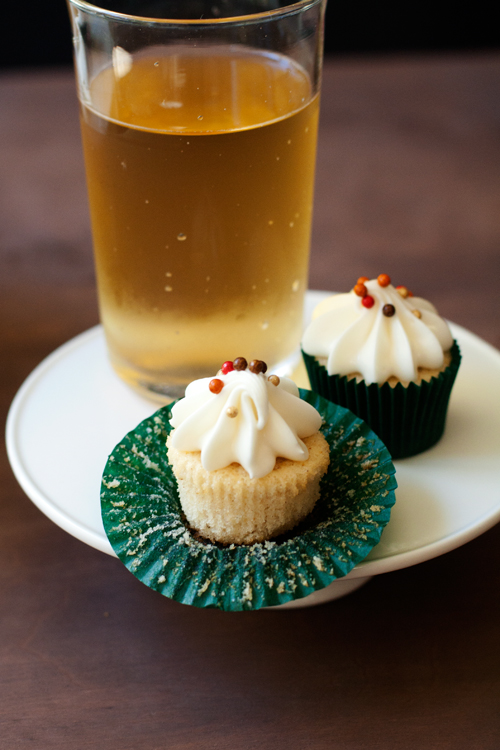 These cupcakes are made in my favorite way for any cake or cupcake, by beating the butter with the flour mixture…instead of beating the butter and sugar until fluffy and then gently folding in the flour at the end. I love this method because it always produces a cake with a fine, almost dense crumb, but manages to remain light and spongey, yet tender. The thing is, the butter fat coats the flour which kind of waterproofs the gluten, so when you add the liquid the water doesn’t activate the glutens and prevents them from becoming gummy and chewy. BOOM!

So if you have some hard cider waning away in your fridge, looking for some way to be consumed, or even if you’re just a fan of booze-laced treats, these tender little dudes are just the thing. 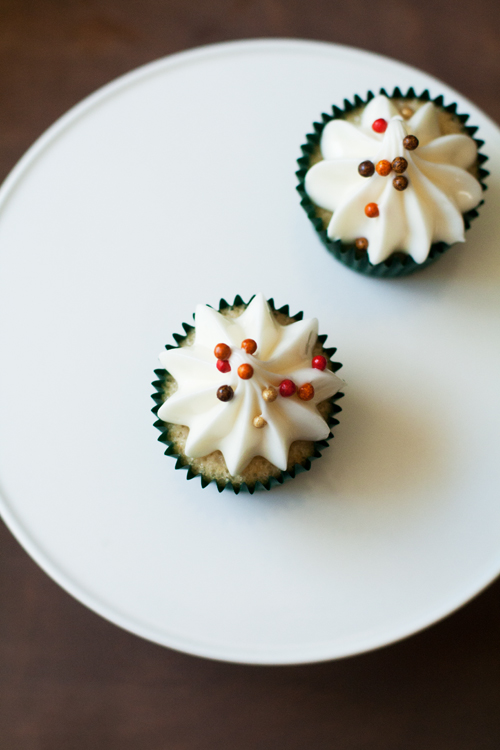 Adapted from Take a Megabite

I used Angry Orchard Cinnful Apple Hard Cider in this recipe, since Sean couldn’t find the cider I usually buy…for drinkin’. It turned out to be perfect for these cupcakes. You can use whatever hard cider you want.

In the bowl of a mixer or using a hand mixer and mixing bowl, beat the butter until creamy, about 1 minute.

In another bowl, whisk together the flour, cinnamon, nutmeg, baking powder, salt, and sugar. Add it to the butter and beat until the mixture is combined and resembles a crumble topping. Add the eggs, 1 at a time, scraping after each, once incorporated continue to beat for about 2 minutes until light and fluffy. Scrape down the bowl and add the vanilla, followed by the hard cider and beat until just combined. Scoop heaping tablespoonfuls of batter into each muffin liner, I like to use a mini cookie scoop with a levered handle (also known as a disher). Bake 1 pan at a time in the center of the oven for 14-16 minutes or until the tops are dry and spring back to the touch. Remove from oven and cool on a rack while you make the frosting. Repeat with remaining pan.

Beat the cream cheese in a bowl until smooth. Add the powdered sugar and the hard cider and mix to combine. Pipe or spread onto completely cooled cupcakes. [/recipe]