So, I have never been a fan of oatmeal, it’s always been a little mushy-mushy for me. However, these days, I’ve been eating it a lot lately because I know oats are super good for you and it’s a hot, easy breakfast to make on these chilly Michigan mornings. Since I’ve been forcing myself to embrace oatmeal, I usually have it with a little maple syrup and maybe a few pecans or walnuts mixed in, for a bit of sweetness and texture. The other day, though, I was out of my usual mix-ins and opted for a spoonful of peanut butter…and it was so good! So, it got me thinking that peanut butter might just be a great addition to my favorite granola.

And, surprise, it totes was.

I mean, you can’t really go wrong with nutty, creamy peanut butter, crunchy oats, and little chocolate chips. Can you? I don’t think so. 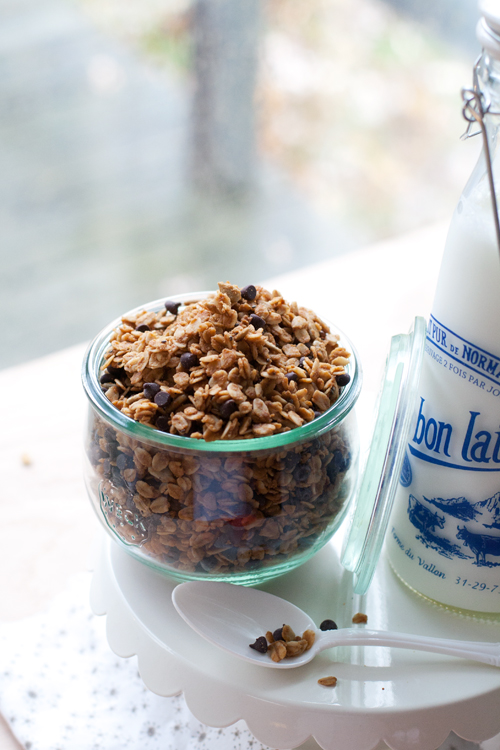 I use both honey and maple in this recipe, though you could use just one sweetener if you like. The coconut oil can be subbed for olive oil, if you prefer. Also, chia seeds can be substituted with flax and the mini chips can be replace with whatever chip or chopped bar you like.

Preheat your oven to 325˚F and line a baking sheet with parchment.

On the stovetop in a saucepan heat the maple syrup, honey, peanut butter and coconut oil until the peanut butter and oil are melted and the mixture is nicely combined. Pour the peanut butter mixture into the oat mixture and stir to coat evenly. Scrape the mixture onto the baking sheet and spread in an even layer. Bake for 30-40 minutes, stirring every 10-15 minutes so the peanut butter does not burn, until golden and crisp. Remove from the oven and cool completely before mixing in the mini chocolate chips. Store in an airtight container for well over a week. [/recipe]