…and I come bearing donuts. Donuts masquerading as shortcakes, topped with juicy, sweetened raspberries and lots of whipped cream. 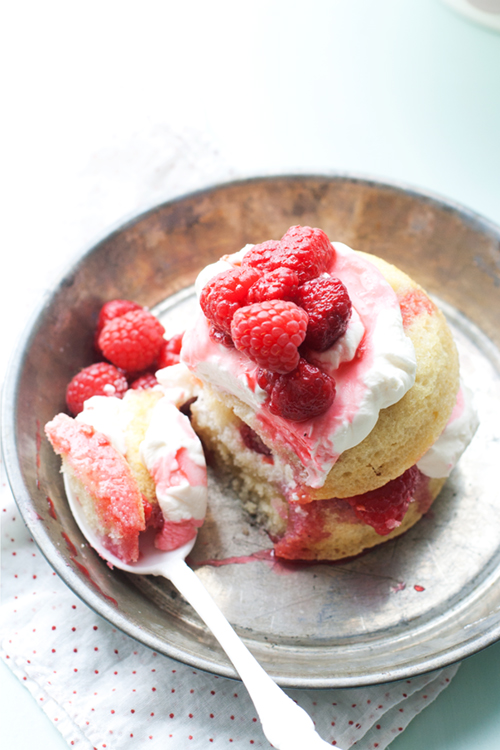 This is the very first post I’ve prepared for you from our new apartment. I’m hoping to do a quick tour of the place once things get a little less crazy lookin’ around here, but for now just know that it has a great, south-facing window and a cozy kitchen, both of which I plan to utilize for much posting in the future.

But, for now, let’s talk these donuts. They’re the springy and tender like the best of cupcakes and scented with vanilla and almond. I love almond, especially with raspberries. So fragrant and delicious! The berries are simply macerated with some sugar and the cream is whipped and unsweetened. I actually over whipped my cream, which kinda drives me nuts but it was all I had so I went with it. Pay attention and whip that cream to the softest of peaks, don’t be like me.

Regardless of the over-whipped-cream debacle, these cakes were reminiscent of those shortcakes that don’t actually involve a biscuit-y shortcake but those spongey, little yellow cakes you find at the store near the strawberries…except, way better, ovbs, since they’re DONUTS and we’re baking them fresh. 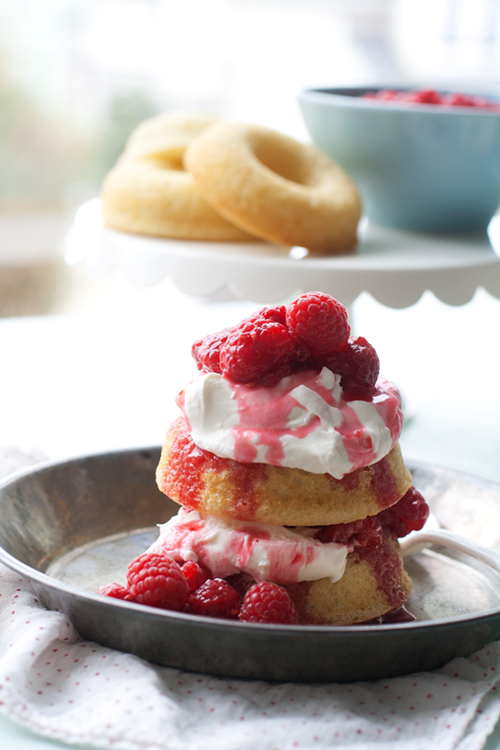 Adapted from THIS recipe, originally from Saveur.

Preheat the oven to 350˚F. Lightly coat a donut pan with cooking spray (I like coconut oil spray).

In a mixing bowl whisk together the flour, sugar, baking soda, and salt. In another bowl whisk together the canola, buttermilk, egg, and extracts. Pour the wet mixture into the dry mixture and fold until just combined. Spoon (or pipe) batter about 1/2 way up each donut well and bake in the center of the oven for 8-9 minutes, or until the donuts spring back to the touch. Remove from the oven, cool in the pan about 1 minute before flipping out onto a cooling rack. Repeat with remaining batter.

sugar and a dash of vanilla, if desired

To assemble the cakes:

Place 1 donut on a plate, top with a generous amount of cream and berries, repeat on top with another donut, cream, and berries. [/recipe]