Even though they often look like a swamp-drink, I’ve been drinking smoothies like this one every morning for weeks now. My mom generously gifted me the Vitamix I’d had my eyes on for Christmas and it’s been smoothie-town up in here ever since. It’s a pretty healthful way to begin the day and since we are notorious breakfast skippers in this house, it’s the best lazy breakfast during the week. The swampy hue comes from a big handful of spinach, but it’s not even a detectable flavor, though visually it’s no beauty. The key is drinking it before it reaches room temperature, because that’s when the spinach really oxidizes and turns into some sort of swamp-thang.

This cherry almond smoothie is my favorite lately. It reminds me of that Jergens lotion my grandma always wore, but delicious. I know…I’m really selling it here. What I mean is that stuff smells like almond extract and even though it’s a pretty powerful flavor, I love it. Especially with cherries and something creamy. When we were living in Michigan I became straight-up obsessed with tart cherries. Recently, I spotted giant bags of organic tart cherries (at Costco) and I’ve been hoarding them a bit and churning them into our morning smoothies. I even blended some into a beet puree for Casper–jury’s still out on whether or not he’s into beets. So, this smoothie basically tastes like dessert, but healthier because spinach and hemp hearts and all that hippie shit. It’s tart from the cherries, fragrant from the almond extract, sweet from the banana, creamy from the almond milk, and totally filling thanks to the almonds and hemp hearts. 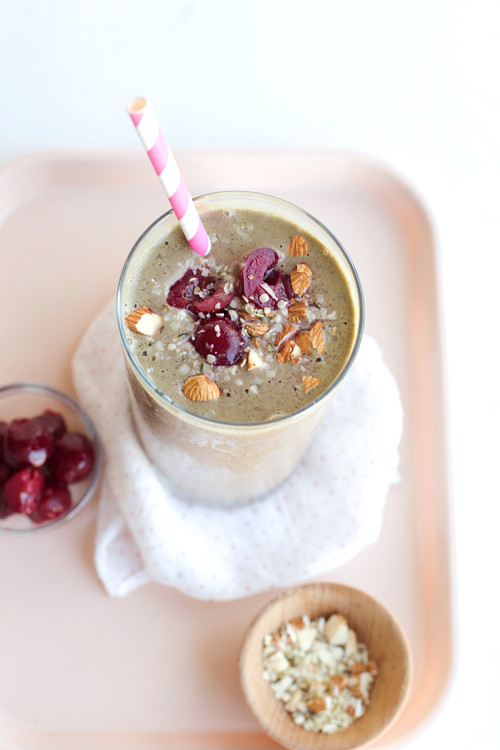 Sometimes I do half yogurt, half almond milk here. Go wild, be yourself. Also, the order the ingredients are listed is the order I layer them in my blender, I feel like it blends best this way, but really do whatever.

1 cup unsweetened almond milk (or whatever milk you prefer)