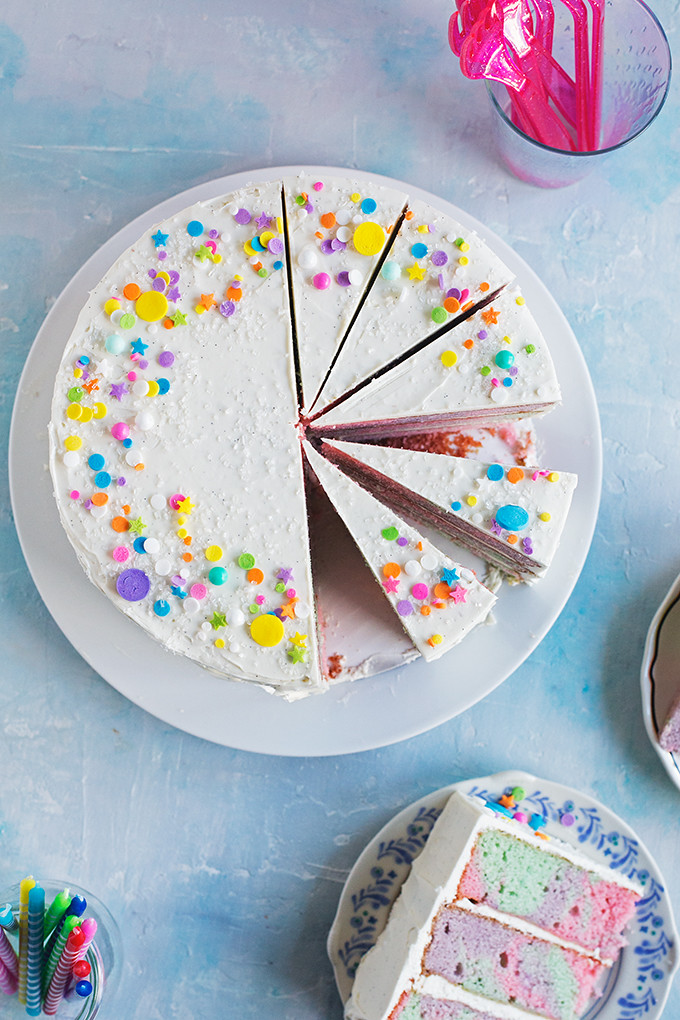 You guys! My baby turned TWO a few weeks ago and I can’t quite believe it. Like, where  did my sweet, squishy babe go and where did this jumping, climbing, shouting (always with the shouting), little weirdo come from? I mean, yes, the sweet babe is still there, giving me sloppy kisses and asking ever-so-sweetly, “Otay, Mama?” every time I sneeze (srsly, I die). But man, all those cliches about growing up too fast are so true.

Our celebration was small but exactly how we like to do things–Casper’s aunt and uncle came over and we walked to this great pizza place in our neighborhood (FWIW, Pizzeria Otto in NE Portland), then walked home for cake. I figure  we can keep the birthday fêtes simple until he’s older and has friends and actually cares about a party. Even though we went low-key, you know I had to make a fun cake! I love an opportunity to make a layer cake and while Sean always wants chocolate-covered-chocolate with extra chocolate, I can do whatever I want for Casper (until he tells me otherwise, which I’m guessing will be on the horizon sooner than I’d like). Thus, this rainbow marbled wonder was born and it just gives me all the same feelings I’d get flipping through my Lisa Frank sticker book circa 1993. While the rainbow marble effect is super fun and totally aesthetic, the actual cake is a solid vanilla bean and buttermilk batter that bakes up flat-topped layers with a fine, tender crumb. You could frost this with any frosting you want–it’s a basic vanilla cake so the pairings are really endless–but, I went with vanilla bean Swiss meringue buttercream. It’s from Tessa’s book, Layered, and makes just enough to fill and frost an 8-inch layer cake. In my opinion, it’s a dream to work with and always produces the silkiest frosting that isn’t too sweet, holds up well, and tastes great, too. 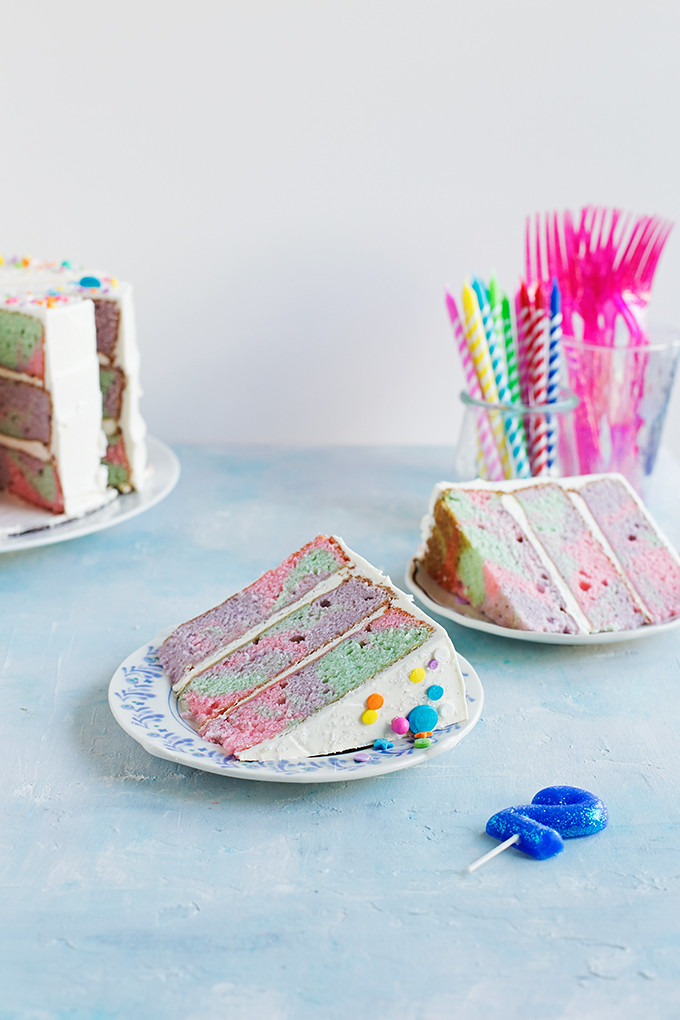 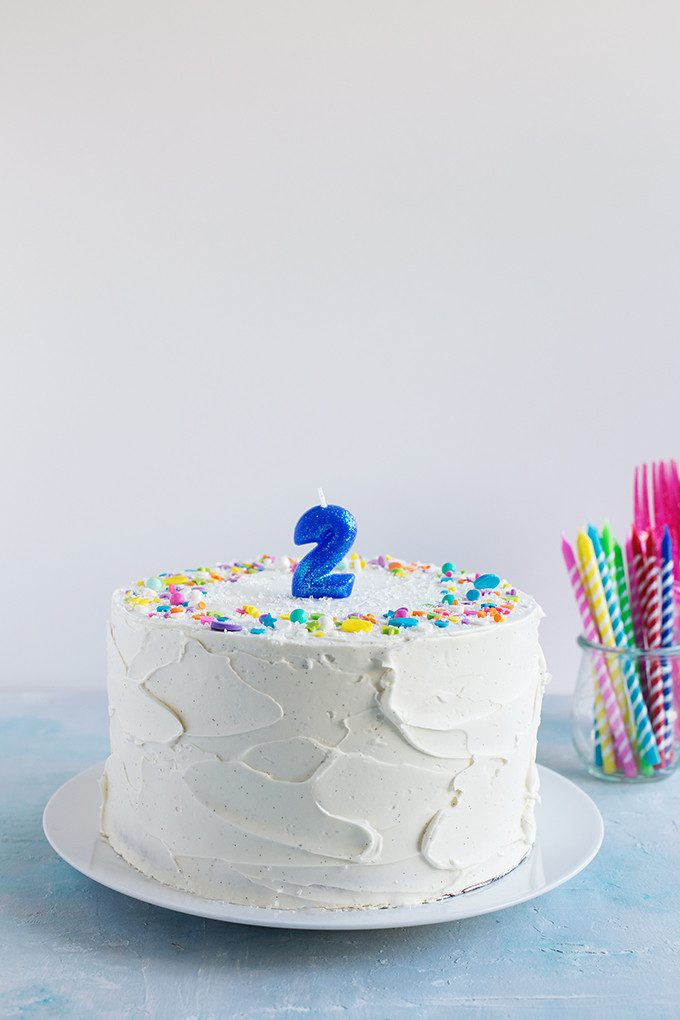 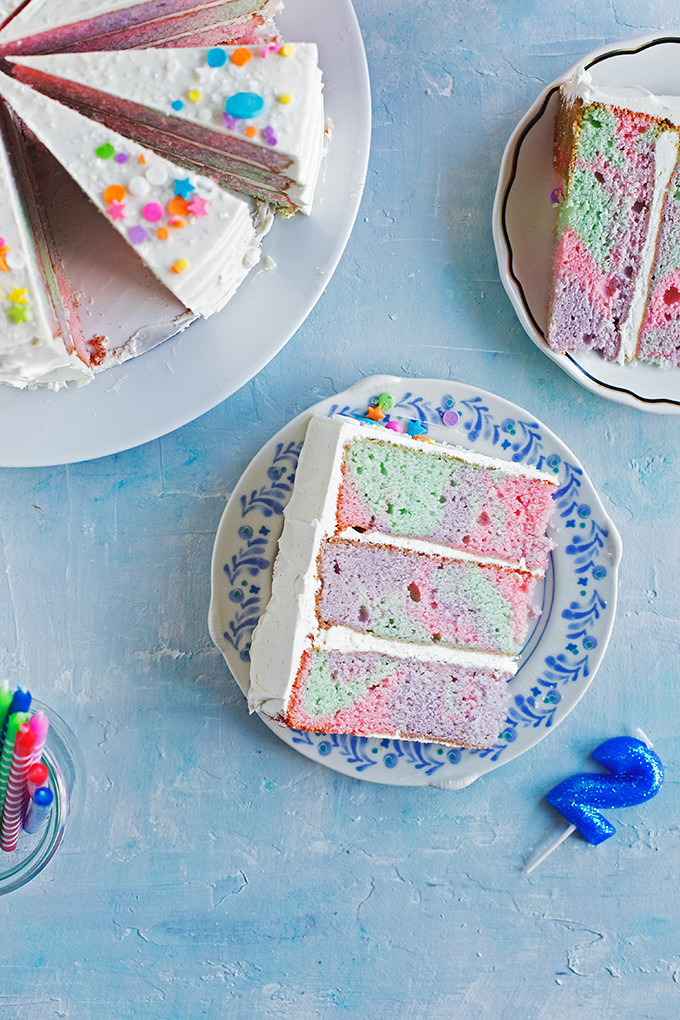 I used whole vanilla beans in this recipe, though you can use extract or paste (about 1 tablespoon in the cake and 2 teaspoons for the frosting). When I buy vanilla beans, I store them upright in a lidded jar with about ½ inch of clear, flavorless alcohol (like vodka). This keeps the beans from drying out and when it comes time to use one, instead of splitting & scraping, I just snip off one end squeeze all the way down from the other end and into my recipe. Then I pop the pod into a jar of sugar or alcohol (for extract).

I used 8-inch round cake pans with 3-inch sides for this recipe.

This amount of batter also makes a 3-layer, 6-inch, cake plus 12 cupcakes.

The butter should be soft but not so soft it can't hold its shape, is melty, or appears greasy on the surface.

If the buttercream looks curdled, just keep mixing it! There are many troubleshooting references online and in books for swiss meringue buttercream, but I often find that mixing it longer will do the trick most of the time.
3.5.3208