sunday i made orange chicken and cashew zuchinni. i found the recipe about a month ago in a pile of magazines i was donating to the preschool i used to work for. sean is a pretty big fan of asian foods—specifically chinese and korean (thanks to me)—and he has been harping me to try out some recipes at home since we began living and eating together…nearly 3 years ago. 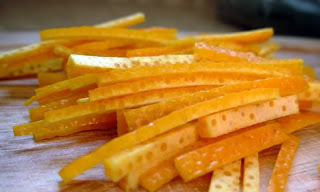 whenever people learn that i was born in korea they ask one of two things: “do you speak it?” and/or “do you cook it?”
it, being korean. and yes, people always say it, with eyes wide and smile even wider. the answer to both is no…unless you count bim, meaning rice or kimchi…meaning kimchi? like i said, i don’t speak it. but i digress, this is not about cooking korean food, it is about cooking chinese-ish food.

i had not a clue as to how to make anything chinese, i have always relied on my favorite restaurant (as far as reno goes this is it for me) to do the cooking. i think that in my mind failure to create a successful asian dish would just make me spiral into a deep and ridiculous depression and ask myself, “what kind of half-asian girl are you?” and, i am that person (we all know that person…or maybe we are that person) who won’t try something because the fear of failure paralyzes. i decided to just get over myself and try it out. because, what could really happen? nothing is the answer, except a potentially tasty (and unhealthy) meal for the dogs.

so finally, i did it. just for sean, i decided to make orange chicken. it was sweet and spicy and deliciously orangey. however, i added a teaspoon (the recipe called for 1/4 teaspoon) of red pepper flake (half to the sauce and half toasted in the pan with the orange peel) and next go around i think i will double the sauce. 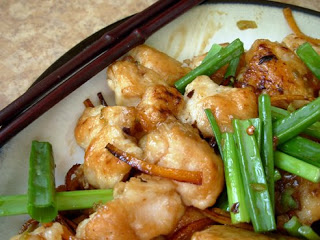 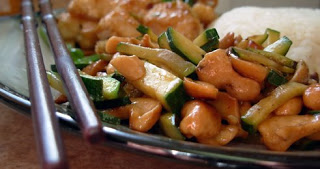 i also made a quick side dish of cashew zuchinni—which was inspired by this dish—since sean was mildy concussed from a header he took at his soccer match earlier in the day and for him, the more food the better. he is a boy of simple needs and pleasures. i find food always satisfies both. the zucchini was incredibly easy and probably my favorite part of the not-so-authentic meal. 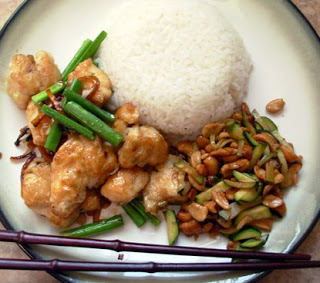