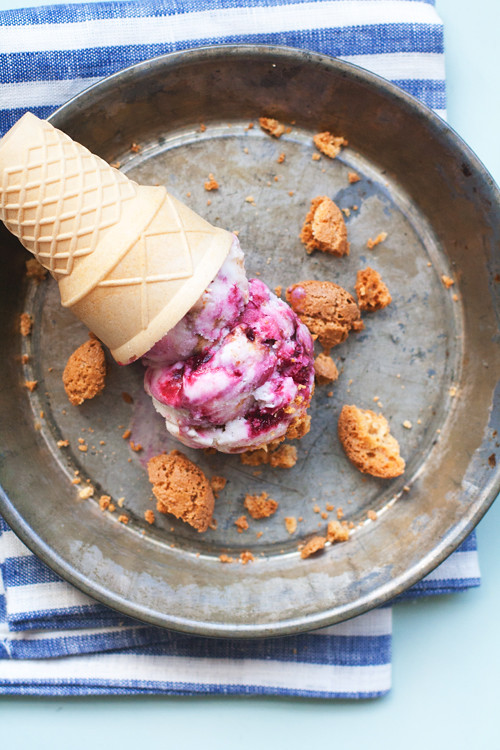 I felt like it was only fitting to leave you with (yet another) frozen treat before things get real cray around here and I take a little break to move into our new place (we signed closing last night!) and prepare for the birth of our son(!!!). I mean, ice cream always feels celebratory, right?

In the spirit of celebration, I know that the question I ALWAYS want to know when someone is having a baby is the name and I’ve totally been holding out on you all. I mean, we’ve had it picked out since before we knew the gender, I just wasn’t ready to share it with everyone we know, plus the internet. There’s a lot of judgement and suggestion coming in from every direction when you are trying to name a baby, and well…it can be SO OVRHWHELMING. But, I’m totally ready and confident to share now. So…without further ado…

Casper, because I suggested it months ago on a super-long list of potentials and it really grew on both Sean and I. We wanted a real, not-made-up name, but also one that was a little different. Hart–which means stag–because I was sort of stuck on a whimsical, woodland theme for the middle name, but still wanted it to be masculine. It’s a nod to my late grandfather who was instrumental in my up brining, since my own father (his son) was killed in an accident when I was really young. He instilled a love of the woods in me and had a woodland nickname himself (Old Grizz), never made me feel like I was missing something growing up without a dad, and was generally my favorite person on the whole planet. Anyway, that’s the deal with the name.

In the next few weeks, I will not be posting any recipes (I may throw in a round-up or two, and a baby update), but I do have some guest posts planned with some of my super-awesome blogger friends. I am really excited to share the delicious bites they’ve come up with and hope you enjoy them as much as I do while I’m away! If you follow me on Instagram (there’s a peach-icon to the left if you want to follow!), I have no doubt there will be baby photos and updates there, as well.

This ice cream is a simple vanilla bean flecked base with swirls of boysenberry–my grandfather’s favorite berry (which are kind of like blackberries)–and raspberry throughout, plus crunchy, almond-y amaretti cookies sprankled in there for good measure. I am a nut for texture and amaretti are one of my favorite treats–plus they pair so nicely with berries and vanilla. 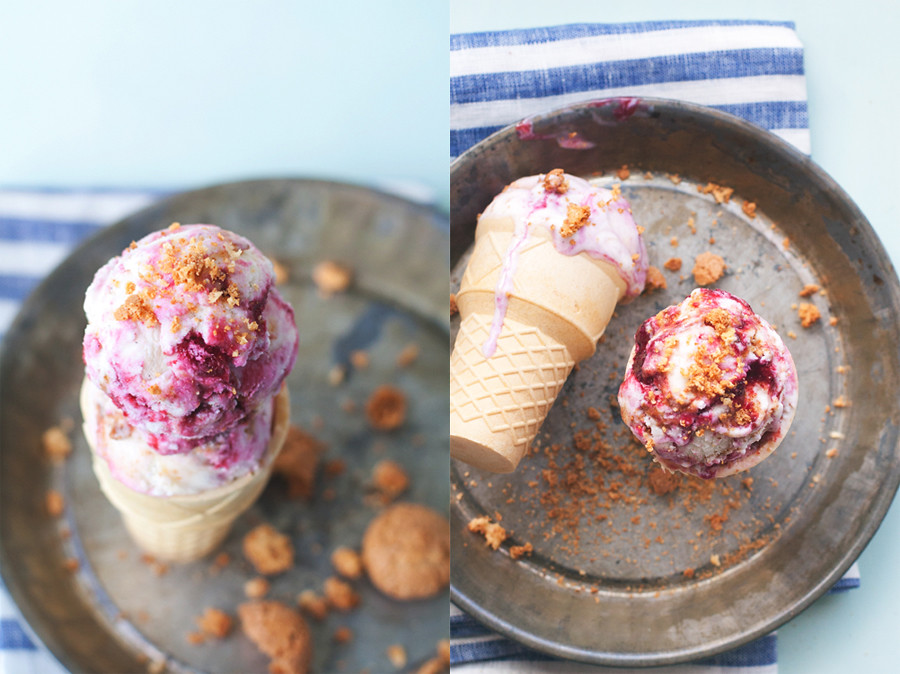 Makes about 2 pints of ice cream.

You can use any berries you’d like for this recipe. I went with boysenberries and raspberries. You can also combine the berries instead of keeping them separate when making the syrups. Amaretti cookies are crunchy, almond Italian meringue cookies.

1 cup each raspberries and  boysenberries

In a saucepan combine the raspberries and 1/4 cup of the sugar. Heat over medium high until the berries release their juices and begin to boil. Boil about 2 minutes and remove from the heat. Press the raspberries through a fine mesh strainer into a heatproof bowl, extracting as much juice as possible. Discard the solids.

In a small bowl combine 1/4 cup of the milk with the cornstarch, to create a slurry. Set aside.

In a saucepan, combine the remaining milk, cream, and vanilla seeds + bean pod. Heat over medium-high until scalded (when small bubbles form around the edges of the milk mixture and it begins to steam), remove from the heat, cover, and allow to steep for 15 minutes.

In a large bowl, whisk together the cream cheese and salt, set a fine mesh strainer over the top of the bowl. Set aside.

Prepare an ice bath in a large bowl or clean sink basin.

Remove the vanilla bean pod from the milk mixture and stir in the cornstarch slurry you prepared earlier. Return the milk mixture back to medium-high heat and stir in the sugar and corn syrup. Bring the mixture to a boil, stirring frequently, until thickened. Boil about 4 minutes. Remove the mixture from the heat and strain through the fine mesh strainer into the bowl of cream cheese and salt. Whisk to combine well. Pour the ice cream base into a gallon sized, zip-top, freezer bag and seal. Place the bag in the ice bath to cool. Once cooled completely, place in refrigerator up to 24 hours and churn in an ice cream maker according to the manufacturer’s instructions, or churn immediately.

Once the ice cream is churned, layer it into a freezer safe container, 1/3 at a time, drizzling with the berry syrups and sprinkling with crushed amaretti cookies. Repeat with remaining ice cream, syrups, and cookies. Place the ice cream in the freezer for several hours, until firm, before serving.