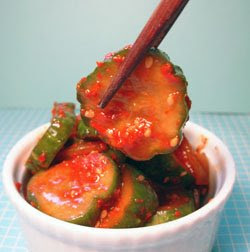 this is a big deal to me. even though it was a bit on the salty side, i did it. i made kimchi. for those people that have not eaten korean food, kimchi is one of the most well known banchan. essentially banchan are small side dishes traditionally served along side a meal. kimchi can be made of many different vegetables, but in my home growing up my mom made it out of napa cabbage, daikon, or cucumbers. my favorite is cucumber. it is also known as oi kimchi (which i did not know before, i’m a bad half korean…but thanks to sarah, i now know). i love it. it is cool and spicy, a bit briny, and quite pungent. growing up, we used to have this squat, plastic table with fold out legs that we would eat korean meals on. it was low to the ground and we would sit cross-legged on the floor. i liked this little table because it made the meal feel more authentic–even in suburban california–and because we often ate in the living room, which always felt sort of rebellious. i don’t have one now, or even a coffee table, and the dogs would be begging at eye level and that is just gross. so, i put a tray on my lap and eat on the couch…you know, to achieve some authenticity.

like i said, this is a big deal. i have never even attempted kimchi, but when i saw these fat little pickling cucumbers at the farmer’s market, i could not resist. i had actually been eying them for a couple of weeks, whining that i wish my mom were in town so she could make me some cucumber kimchi…sigh. so, finally i just bought some, called my mom, and here we are. this is not the traditional buried-in-the-ground-in-a-clay-pot-for-months version. i guess it could be likened to a refrigerator pickle. 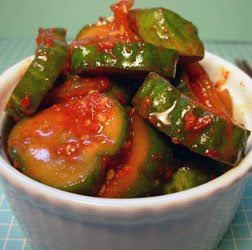 cucumber kimchi
my mom doesn’t really work in exact measurements…she tastes as she goes. but, i did note the measurements i used and i think that this recipe can be doubled if you want to make a large batch. this can also be made with regular english or waxed (peal them!) cucumbers…or daikon, cabbage, etc. also note that the gochugaru is a suggested amount, use more or less to your taste. gochugaru can be found in korean or asian markets. i also used too much salt and allowed it to sit too long…i didn’t listen to my mom, as it goes, but you should.

place cucumbers and onion in a large bowl, toss with salt to coat. allow to sit on counter for 20 minutes. after 20 minutes rinse the cucumbers and onion in a colander very well. combine gochugaru, sesame oil, and sesame seeds with cucumbers and onion in the same large bowl. make sure to toss well to coat. put the mixture into a lidded container, preferably one that is odor resistant (i use a stainless steel container from the korean market, but a glass/pyrex type vessel would work as well) and refrigerate. as with many kimchi’s, i enjoy mine the best after it has been in the refrigerator for a few days. i serve mine with steamed rice and sometimes some steamed eggs with scallions. yum.