One summer during high school, I spent a week with a family friend, Bobby, while her daughter and family were out of town. Bobby was a totally fascinating lady–she attended Berkeley in the 30’s where she studied micro-biology (a lady! in the 30’s! micro-biology!)…and, she introduced me to the ice cream soda, for which I will be forever thankful. 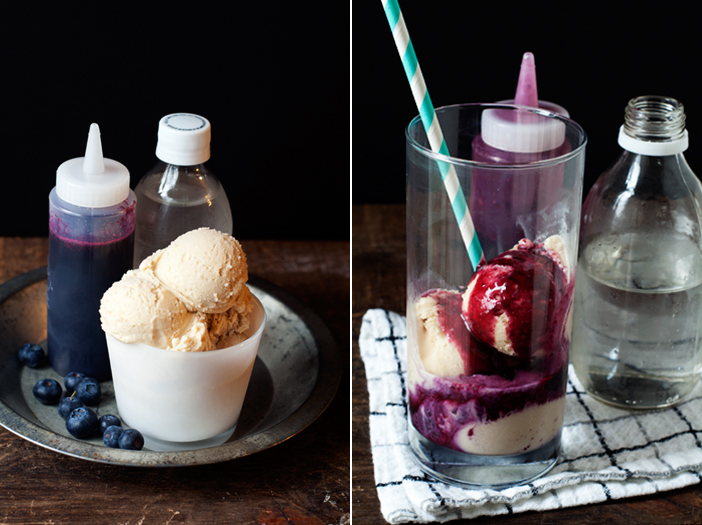 Before, the world of ice cream sodas consisted of the standard root beer float. After, I knew that the possibilities were endless. An ice cream soda is a super simple, old fashioned, soda fountain treat. It’s a simple mixture of ice cream, flavored syrup, and soda water. Here, I’ve paired super maple-y ice cream with a fruity blueberry syrup…because if we’re talking blueberry sans lemon, then I want it with maple. It just is. Adding soda water makes this drink effervescent and mixes the ingredients to create a creamy lavender color with streaks of pale maple ice cream and bright punches of deep purple. 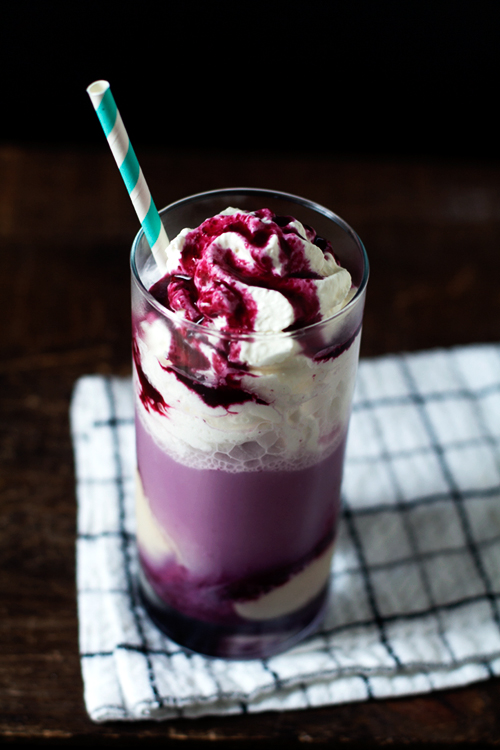 There will be enough ingredients to make several ice cream sodas…so, have one today, tomorrow, and the next day, OR share!

In a tall glass layer the ice cream scoops with spoonfuls of syrup. Pour on the soda water to cover, garnish with whipped cream and more syrup. Serve with a straw.

In a medium saucepan, heat maple syrup and bring to a boil. Cook, turning the heat down as needed if the syrup bubbles too much, until reduced by about half, 8 to 10 minutes. Remove from heat and slowly whisk in the cream.

Place the cream cheese in a mixing bowl (preferably with a spout for easy pouring), and mix lightly with a wooden spoon until smooth. Stir in the hot ice cream base until combined well.

Prepare and ice bath in a clean sink or large bowl. Pour the hot maple ice cream base into a gallon-size zip top bag, seal, and chill in the ice bath until cooled completely. Process the ice cream base in an ice cream maker according to manufacturer’s instructions. Scrape into a freezer container and seal, freeze for several hours until firm.

In a small saucepan, over medium-high, heat blueberries with sugar and lemon until berries burst and release their juices and the sugar is dissolve  Bring to a boil and cook 1 minute. Remove from heat and press the blueberry syrup through a fine mesh sieve, discard solids. Pour syrup into a heatproof jar, cover, and refrigerate until ready to use.