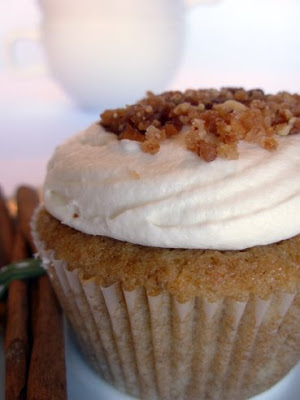 i’ve had a lot of disappointments in the kitchen these days. the carbomb cupcakes, exploding yeast waffle batter that coated me and the refrigerator door, a lost cause vanilla butter cake… no big disasters, just nothing i can really be proud of, which is (so, so so!) frustrating. i have been thinking about this months shf , expertly picked by fanny at foodbeam, since it was announced, so to pull me out of my sad mood i decided it was time to tackle the cupcake before it was too late. 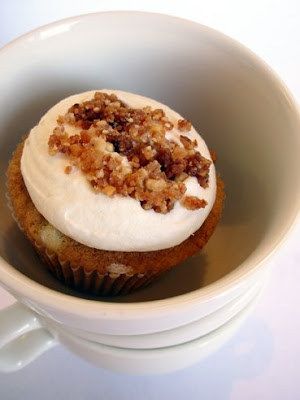 i love, love autumn and all of the flavors, smells, and holidays that come with it. so in my exictement of the new season i wanted to make something warm and scented with spices and vanilla. i decided on a coffee cake cupcake, cream cheese buttercream, with almond streusel sprinkles. the scent of them baking was delicious and the crumb was tender and moist. i was wary of the results in wake of my most recent experiences in the kitchen. i am pretty sure i let out a literal sigh of relief when i was through. 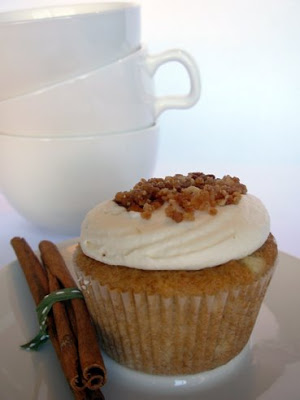 i brought almost all of the cupcakes to work (baked goods in my home=danger) and they were gone by the time i took my break. which was relieving since i didn’t have to take any back home and since i can assume that they were well received.

pulse almonds in food processor until coarsely chopped. add other ingredients and pulse until almonds are ground and the mixture looks like coarse sand. turn out onto a baking sheet in a thin layer and bake for about 10 minutes, making sure the almonds do not burn.

vanilla and spice cupcake
adapted from use real butter. the cake calls for sour cream, but i used cottage cheese, since that is what i had, and a bit of light oil since it is so dry here. you could probably also use plain yogurt.

cream together butter and sugar until fluffy and pale. add eggs and vanilla (both types) mix until just incorporated. mix in cottage cheese. whisk together flour, soda, baking powder, cinnamon, nutmeg and cardamom in a seperate bowl. add to wet ingredients and beat just to combine. i like to fold in the last bit of dry mixture with a spatula to ensure tenderness. divide batter into cupcake molds and bake 15-20 minutes or until toothpick inserted into the center of a cupcake comes out clean.

cream cheese buttercream
adapted from sky high: irresistable triple-layer cakes by alice huntsman and peter wynnet
this buttercream is so, so good. the best of both cream cheese and buttercream frostings, but it does take a few steps…so be aware.

place cream cheese in a mixer bowl and beat on medium until fluffy and smooth, add butter a few tablespoons at a time, mixing until smooth. add powdered sugar and amaretto and mix until fluffy. set aside at room temp and prepare buttercream.

combine sugar and water in a small saucepan and bring to a boil to make a syrup. once sugar is dissolved cook, without stirring, until it reaches soft-ball stage, 238 F on a candy thermometer.

put eggs in clean mixer bowl. when syrup is ready turn mixer on to medium-low and begin mixing egg whites. slowly add syrup to mixing whites, careful not to splash hot syrup. when all of the syrup is incorporated turn up speed and beat until mixture has cooled to body temp and a stiff meringue forms.

with mixer on low begin adding cream cheese and butter mixture by the spoonful. when everything is incorporated raise speed and mix until frosting is smooth and fluffy.