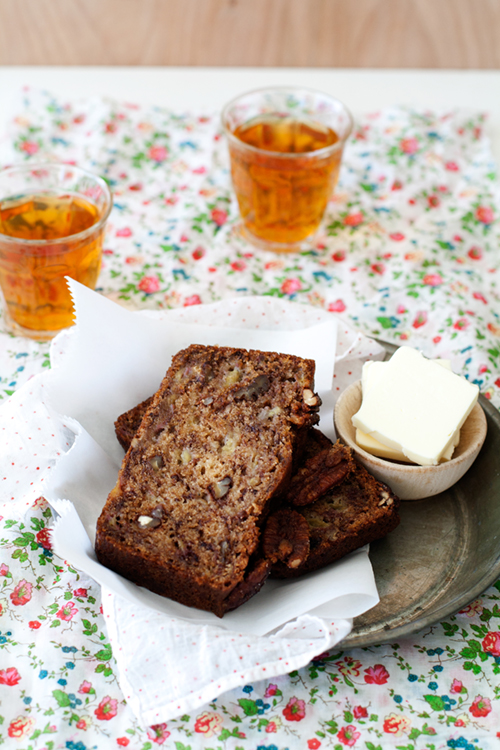 Yesterday, I shared some sriracha-maple pecans on my Instagram feed. The pecans are coated in a mixture of maple syrup and sriracha, making for a sweet-savory combination that is seriously addictive.

Seriously. I cannot stop eating them.

The pecans are delicious enough on their own, as a snack, but I had to put ’em in some banana bread. This spicy situation began this weekend when we went to Salt & Straw for a waffle cone with Sean’s brother and girlfriend, who are visiting this week. This month at Salt and Straw they have a spicy banana walnut ice cream…gah! it’s so good! It’s so good that Sean and I both got a scoop. Which is major since we almost never order the same things–so we can share, obvs. As we were enjoying our treats, I immediately told Sean I wanted to make a bread version using pecans.  Thus, this banana bread.

Plenty of chopped pecans get folded into the banana batter–that also contains a bit of sriracha for a little background hint of savory-spice. The sriracha isn’t super pronounced here, it just brings a bit of salty-heat that plays so nicely with the sweetness of the bananas in the bread and the maple syrup on the pecans. Then, more of those spiced pecans stud the top of the bread so you get a bit of sweet-crunchy-spice in every bite. 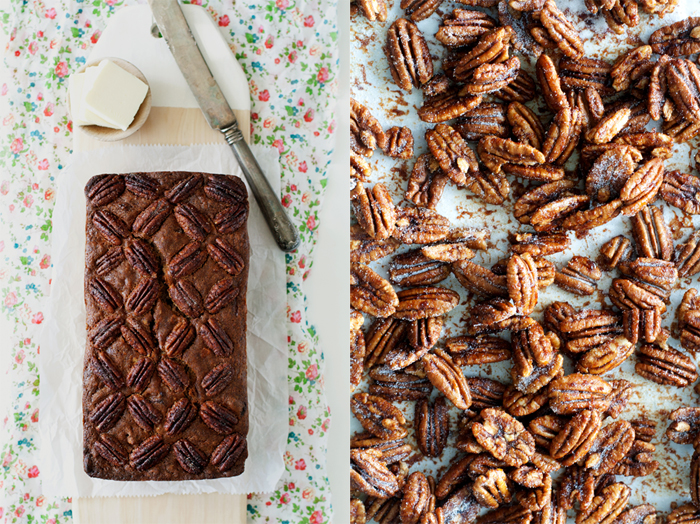 Adapted from this recipe.

Preheat the oven to 350˚F. Line a baking sheet with parchment and spray a 9×5 inch loaf pan with coconut oil spray or other cooking spray. Line the sprayed loaf pan with parchment, leaving an overhang on two sides, secure the overhang with binder clips. Set both pans aside.

In a bowl toss the pecans with the sriracha, maple, and cinnamon until evenly coated. Spread onto the prepared baking sheet and bake in the oven for 13-15 minutes. Remove the pecans from the oven and toss with the 2 teaspoons of sugar to coat, cool slighty. Chop 1 cup of the pecans coarsely and set aside while you make the batter.

In a bowl mash the bananas well and mix with the cooled butter, sugar, beaten egg, vanilla, sriracha, and milk until well combined. In a mixing bowl, whisk together the flour baking powder, salt, and cinnamon. Fold the banana mixture into the flour mixture until just combined. Fold in the chopped pecans. Scrape the batter into the prepared loaf pan and arrange as many whole pecans (from the remaining 1 cup of pecans) on top of the batter as you’d like. Bake in the center of the preheated oven for 1 hour to 1 hour 15 minutes, or until a toothpick inserted in the center of the bread comes out clean. If the pecans begin to get too dark part of the way through, tent the bread with foil and continue to bake until done. Cool on a rack before slicing and serving. [/recipe]